“This is apparently a direct print from the Archivio Storico of RAI and is in astonishingly good condition!”
–Melvin Jahn, Tower Records Guide to the Classics on Video

What do you want from Trovatore? Excitement, above all–oomph! These singers satisfy because of their slancio (emotional intensity, surge, vehemence). Barbieri sings the “Condotta” with a wildness that gives brividi (spinal chills). Her face as she relives the horror of the death of her child is the film’s most gripping visual image. Bastianini gives brividi where you wouldn’t expect them, near the beginning of “Il balen.” He is thrilling as he snarls and thunders the cabaletta. Listening to him in the trio puts you into a frenzy. No baritone since has had as much squillo (ring or ping).

Del Monaco has still more squillo, but he sometimes mars lyric moments with approximated rhythms and pitches. According to his autobiography, La mia vita e i miei successi, at the beginning of his career he appeared as Ernesto and Alfredo–and couldn’t be heard. Then he pioneered a lowered-larynx technique taught by Arturo Melocchi, who had learned it in China from a Russian–the technique previously was unknown in Italy. It gave Del Monaco a powerful, brassy sound, but there were tradeoffs: the sound was thick, sometimes muscular, and he had limited ability to color, to modulate between loud and soft and to sing with agility or legato. Often the sound was constricted in the passaggio (the area of the voice where head resonance begins to predominate over chest resonance).

Corelli, to overcome these drawbacks, modified the technique: whereas Del Monaco held his larynx very low at all times, Corelli caused his, in his word, to “float.” Overall the result was more satisfying even if Del Monaco’s B-flats were more trumpetlike than anyone else’s. In this performance–as is true of Corelli’s live Trovatores–Del Monaco interpolates a high D-flat at the end of the trio but transposes the “Pira.” In any case, Verdi sung with a lowered larynx is as anachronistic as Bach played on a concert grand–although the result can be thrilling. (Corelli’s rejoinder is that in today’s theaters, with today’s louder and more brilliant orchestras, singers need the power and steel that come from the lowered larynx.)

As a vocal personality Gencer is Del Monaco’s opposite. Here she often sings with fragility and other-worldly inwardness. She supplicates beautifully, exhorts with wonderful urgency and conveys the pathos of the death scene more affectingly than any other Leonora on video or CD.

As both actress and musician her timing is exquisite. She adds some crescendo to impel phrases toward their most dissonant points, their harmonic climaxes. When there’s a tied note she supplies a pinch of crescendo at the tie so that you feel the pulse. (This last touch, not uncommon with instrumentalists, is rare with opera singers.) She has a good trill, also lovely fioritura, particularly in descending passages. Her voice has smalto (bloom, sheen, enamel)–which it lost ten years later.

Gencer is Turkish. In Italy, foreigners usually only were engaged for works that couldn’t be well cast with Italians. In 1957 the country was not suffering from a dearth of Leonoras. Perhaps Italy cast Gencer in Verdi because she knew how to valorizzare la parola (to give value to the word), to make every syllable count.

Plinio Clabassi is my favorite post-War bass. He is charismatic. The voice has tremendous bite and core. At no time is it thick, spread or woofy. And he too has a good trill!

Fernando Previtali’s otherwise routine conducting includes a few stylistically controversial contrasts of tempo in the manner of Serafin’s Bellini: the first eight measures of a movement in tempo, the second eight retarded. (Serafin makes this historically inauthentic approach, stemming from late romanticism, work on its own terms.)

The staging is straightforward, with the camera always on the singers. 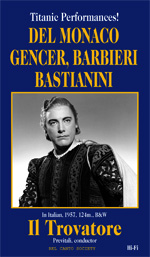