‘Not to be missed.’—John Steane

‘A revealing portrait of Callas— the woman and the artist, with her many contradictions

‘The film begins with a newsreel of Callas’s funeral in Paris, and it is not immediately apparent that it is to be more than an anthology of pious platitudes, oral and visual, assembled and marketed in the emotional floodtide following her then-recent death. Zeffirelli is stationed in the auditorium of La Scala, where he can look towards the stage which ‘still seems to reverberate with the sound of her voice.’ Then we see Callas herself—but not herself, for this is her persona as gracious and glamorous purveyor of artistic truth (as in the assurance that people go the theatre ‘for something better’, there being enough that is sordid and depressing in real life). Then the witnesses arrive, starting with Menotti, who recalls an association with fear and, in her voice, ‘something bitter’. This is more interesting, but instead of pursuing it the film moves on, as is the way with interviews and interview-based programmes. From Rescigno comes ‘a supremely dedicated performer’, from Caballé ‘Thank you, Maria, for coming to us,’ and from Zeffirelli ‘She literally changed the face of opera.’

‘Yet in spite of the patchwork method and flaccid generalisations, the film does succeed in what were presumably its primary aims—to show the fascination of the woman and the artist, the interaction of the one with the other, and, in doing so, to move its audience with the strange mixture of glorious public achievement and deep personal unfulfilment. Stranger still, perhaps, is the stirring of so many conflicting reactions. In the midst of such insistent testimony, the film footage of Callas ‘in action’ inevitably tests the claims. Does it truly support them? Is that filmed ‘Vissi d’arte’, for instance, really the work of a great operatic actress? Often it rather strengthens the view that with Callas, as with all great opera singers, most of the acting is done with the voice. And yet at the end we are left with her singing ‘Ah, non credea mirarti’ from La sonnambula, where the voice becomes frail and unsteady while the face is transfigured, infinitely touching. No: it’s a film not to be missed, and the bonus footage sheds interesting light on its making, especially from John Ardoin, clearly one of its prime movers.’

Newsreel footage: her funeral cortege; the Rome Walkout (‘I would spit in the faces of my enemies…and make them go on their knees in front of me! I can! I will! And I must!’); her break with Ghiringhelli, Callas reading Bing’s telegram firing her (‘I cannot do routine’); Meneghini, Onassis and Churchill; Callas hounded by the press on her private life; Callas dancing with Onassis; her return to New York (1965); press conference about the Medea film (plus clips from the film); Callas as co-stage director with Di Stefano, directing Vespri in Turin; in a bathing suit with Onassis; interviews with her fans, who had been on the Met standing-room line for four days; Onassis’s death.

Interviews: Bing (‘Does she run the Met or do I?…She became intolerable!’…’She was more difficult than others because she was more intelligent”); Nicola Rescigno (‘Her body was like that of a pachyderm’); Rescigno and Giulini explain her actions and their consequences; Lord Harewood’s interviews with Callas; Menotti; Scotto (‘Callas taught me discipline’ and on the Edinburgh Sonnambula and the Scala Medea—’Cut Glauce’s aria’); Caballé; Gobbi on her lost confidence and unhappiness; De Hidalgo on Callas as a student; manager Gorlinsky on the Callas-Di Stefano concert tour; Tebaldi on their rivalry; Visconti in discussion with Callas in French with English subtitles, including the ‘radish’ incident.

Other topics: Sound vs. the use of sound: Tebaldi vs. Callas; her debut at 15; her Italian debut; ‘I learned from Serafin that you must serve music’; ‘No agent would give me a job because immediately after my debut I wasn’t loved that much. I was something new to listen to and they disliked anything that took them away from tradition’; her history at La Scala; her weight loss; her glaucoma; Jackie Onassis; Zeffirelli and Gobbi on the London Toscas, her loneliness, her death. 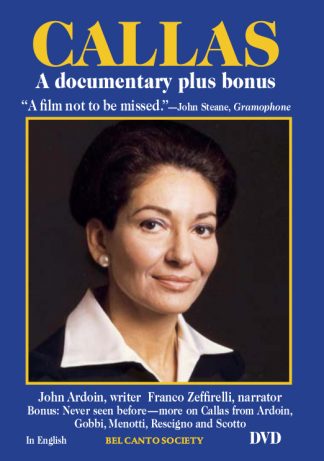 You're viewing: Callas, A Documentary From: $9.95
Select options