Downloadable .M4A or .MP3 files. Total size: approx. 570 MB. (This is a very large file; please be patient as it downloads.)

“‘Opera Fanatic’ is a combination of all kinds of wonderful things. It’s always in-depth but always fun.”

“The interviewees are often critics or singers, but they are always knowledgeable. Zucker has interviewed Franco Corelli eleven times, Alfredo Kraus, Carlo Bergonzi, Franz Mazura, Louis Quilico and Francisco Araiza (twice), among many others. The interviews range from serious discussions of technique to hilarious anecdotes. They are like un-put-downable books; you can’t stop listening. Zucker, a singer himself, is a supreme musicologist–though not a stuffy one–who really knows the field and the right questions to ask.

“Very little music is played on some of the nights he has interviews. During one of the Araiza interviews, there was no music at all. Can you imagine conducting a four-hour interview and sustaining total interest? Zucker can do just that.

“Another two interviews that I cherish were with Schuyler Chapin, a year apart. Chapin is former General Manager of the Metropolitan Opera and at various points in his career an executive with Columbia Artists, Columbia Records and Columbia University (strange coincidence there). He’s a Guy-Who-Knows-Everybody-Who’s-Anybody in the music world….

“Franco Corelli’s interview and reception at Florence Gould Hall were wonderful. I was there as well as at a similar Corelli-Zucker affair the previous summer. Zucker is so important to opera lovers in the New York region and I would strongly suggest that anybody visiting the area tune in to the show. Years from now, I believe, it will be one of the primary sources for the opera history of our time.”

Topics Discussed by Francisco and Stefan:

Apologies for being hoarse on this tape. Mr. Araiza had kept me waiting outside for 45 mins. It was eight degrees Fahrenheit (minus 13 celsius), with a wind. I was shivering and lost my voice.–SZ 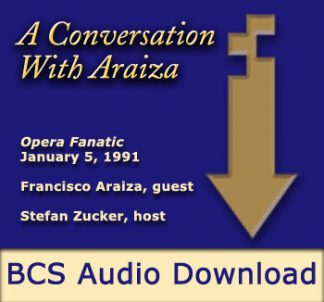