RIVETING! The best plot of any Gigli movie.

Paul Hörbiger movingly portrays the real-life Canio on whom the opera was based. In the opera’s premiere, Gigli is the Canio. To express the drama, he colors his voice far more than any other Canio on film or record. The film includes nearly the entire role.

In Ridi Pagliaccio Gigli’s voice is more mature–and more appropriate for the part–than in his 1934 recording. On the recording he is colder and less detailed interpretively. It was made before he had stage experience with the role, whereas the film dates from 1942, when he was appearing as Canio at the Rome Opera. In the 1934 recording he gives priority to sonority. In Ridi Pagliaccio he gives priority to emotion.

Before this film Gigli was a lyric tenor who frequently sang dramatic-tenor roles. With this film his voice became a dramatic tenor although he retained his ability to sing sweetly.

In the Memoirs Gigli wrote of those 1942 performances:

With a kind of animal instinct of self-preservation, I always had refused this highly dramatic rôle [Canio]–a favourite of Caruso’s–when Gatti-Casazza proposed it to me at the Metropolitan. At that time I felt it would put too great a strain on my voice. But in 1934 I had ventured to make a recording of it; and the fact that I now felt able to sing it in public gave me conclusive proof that my voice was stronger than it had ever been before. [Memoirs, page 211]

He is particularly impassioned in the opera’s final five minutes.

Gigli’s mezza voce remained ravishing to the end of his career. In Ridi Pagliaccio he purrs “Prendi: l’anel ti dono,” from Sonnambula, with surpassing sweetness.

The music in the film breathes beautifully, presumably thanks to the conducting of the legendary Luigi Ricci. This is a rare recorded example of his work. (He is remembered as a coach to Gigli, Olivero and others and was a composer in his own right.)

For all these reasons I watch the film again and again.–Stefan Zucker

“Among the Bel Canto Society DVDs already available, two stand out for me…. ‘Ridi Pagliaccio,’ especially, unfolds with touching dignity, never trivializing either life or art. We see Beniamino Gigli play the singer who created the leading role in ‘Pagliacci,’ first trying out his big aria as the opera is being written, then nailing it with searing passion at the world premiere.”

“In the compelling Ridi pagliaccio from 1942, after hearing Gigli sing the Prologue over the titles, we see the real-life Canio come out of prison on parole after 20 years, to find his daughter adopted by a rich lady and about to marry a man of good family. He is befriended by Leoncavallo, who writes the opera based on his story; but it would spoil your enjoyment to reveal all the dramatic twists and turns. Gigli, in magnificent voice, sings not only some songs and scenes from Pagliacci, but also a lovely, melting interpretation of ‘Prendi l’anel ti dono’ from La sonnambula. Paul Hörbiger plays the old man most affectingly. Familiar themes from the opera are woven into the soundtrack.”

For a review of this title by the Wall Street Journal click here. 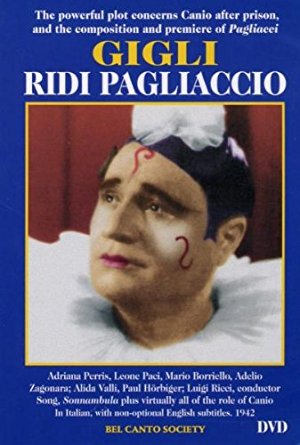