In the film Gigli uses closed tones, covered tones and open tones. The booklet points out where he is employing which kind of tone, track by track. Together the DVD and the booklet should help those perplexed by the discussion of closed, covered and open tones in Franco Corelli and a Revolution in Singing.

This is the title customers most frequently reorder to give as a gift. And no wonder. One woman wrote Gigli that in 30 days she had seen the film 76 times.

“Non ti scordar di me” was picked as among the top videos of 1993 by Steve Cohen in The Delaware Jewish Voice and The Philadelphia Jewish Times. Cohen added, “This is Gigli’s most popular film, lovingly restored, one of a series of remastered musicals from Bel Canto Society.”

“The personality of Beniamino Gigli comes across in a video titled ‘Non ti scordar di me,’ distributed by Bel Canto Society, a New York organization catering to hard-core opera enthusiasts. Despite the Italian title (which means ‘do not forget me’), this is an English movie, dating from the 1930s, which is interesting today primarily because Gigli (typecast as an Italian singer) dominates the soundtrack with operatic arias, a lullaby and some Neapolitan songs, including the one that gives the movie its title and serves as the leitmotif in a simple, marginally plausible but touching love story.”

“Gigli is cast twice, in his first and second films, Non ti scordar di me (in English, despite its title) and Ave Maria (BCS Video #511), as a middle-aged singer who has recently lost his wife. In the first he marries a young girl who’s on the rebound from an affair and remains faithful to him (just) when her lover returns–again through the appeal of his voice. In the second his singing wins him the love of a cabaret artist who has been inveigled into conning him. In both Gigli has ample opportunities to deploy his art, the true, honest quality of his singing saving him and the plot from sentimentality.

“One gains a wonderful idea of the disarming simplicity and generosity of the man which wholly exonerates him from a charge of ham acting. The voice itself pours out of him in that well-known, heartfelt manner, uniquely his, the honeyed mezza voce a thing to wonder at. In Ave Maria, Erna Berger joins him in short extracts from La traviata.”

What sets Gigli apart from nearly all other 20th-century tenors? His singing is full of contrast. Such 19th-century holdovers as De Lucia varied dynamics and tone color as well as rhythm and, sometimes, notes. Most singers since at best have had or have created one sonority of individual character, at one dynamic level. Caruso and those who followed him mostly sang at full voice. Pavarotti and company do little varying of dynamics and seldom shade their tones, using the same color to express both happiness and sadness.

Gigli had many sonorities and two basic dynamic levels, loud and soft. Non ti scordar di me finds him in peak form and provides a key to some of his best art, making clear that it was based on chiaroscuro–the contrasting of tone colors, usually in response to words, and of soft passages with loud. He repeats the title song, singing it differently.

Gigli made extensive use of a vocal technique known as “covering,” involving darkening the tone and modifying vowels, almost as if some were schwas (like the “uh” sounds in “America”). Early in the film he sings a song, “Mille cherubini in coro,” “closed”; repeating it later, he covers so heavily that if you aren’t sure to what the term refers, you’ll know after hearing him do it.

Record labels typically released recordings of Gigli in songs from his films contemporaneously with the release of the films themselves. Some of the songs went on to become popular hits. For Non ti scordar di me, one of Gigli’s accompanists, the Neapolitan composer Ernesto De Curtis, wrote “Non ti scordar di me” and “Addio bel sogno,” while Alois Melichar wrote “Serenata veneziana.” Melichar also fashioned Schubert’s “Wiegenlied,” op. 98, no. 2, into “Mille cherubin in coro.” The shipboard scenes were filmed on the liner Bremen, in Hamburg harbor.–Stefan Zucker 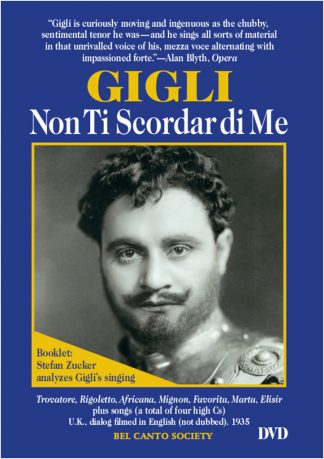