This “E lucevan le stelle” is the most sensual of all live tenor recordings of the 20th century. Corelli considered this one of his three greatest performances of anything.–Stefan Zucker

Listen to a sample of “E lucevan le stelle”: 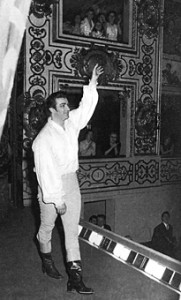 “If you love Franco Corelli, and don’t already own this set, you will definitely want to acquire it at once. For those who have yet to become acquainted with the magic of this great, if controversial, tenor, I truly cannot think of a better place to start.”

“The booklet cover of this CD issue from Bel Canto Society says it all, with ‘CORELLI’ emblazoned at the very top. During the course of a long and brilliant career, Franco Corelli sent audiences into frenzies with his matinee-idol looks, golden tenor voice, and atomic high notes, often held for what seemed an eternity. Many critics found Corelli’s style extraordinarily self-indulgent, but few denied his unique magnetism.

“This Tosca was recorded in performance at Parma’s Teatro Regio on January 21, 1967. On the booklet cover, the tenor is quoted as saying: ‘Cavaradossi? This one’s my best!’ And indeed, it would be hard to disagree. On this occasion, Corelli is in absolutely spectacular voice, and he knows it. Cavaradossi’s opening aria, ‘Recondita armonia,’ is taken quite broadly, allowing Corelli to caress the vocal line and to deliver a stunning (and prolonged) B-flat at its climax.

“Corelli’s performance is brimming with such moments. Perhaps the most spectacular occurs in Act II, after Cavaradossi has been returned from Scarpia’s torture chamber. When Cavaradossi learns of Napoleon’s victory, he leaps to his feet and sings ‘Vittoria!’ The second ‘Vittoria’ is sung on an A-sharp that Puccini directs be delivered allargando molto (very broadly). But even Puccini could not have dreamed of the twelve(!)-second elongation Corelli accords this high note, driving the Parma audience into an absolute frenzy.

“The love affair between Corelli and the Parma audience continues into the opera’s final act. As in his first-act aria, Corelli takes ‘E lucevan le stelle’ at a markedly slow tempo. The opening of the aria is notable for its hushed beauty. And then, Corelli arrives at the sequence beginning ‘O dolci baci, o languide carezze’ (Oh sweet kisses, languorous caresses). At the high A on the word ‘disciogliea,’ Corelli sings a protracted and beautiful diminuendo, continuing on the same breath to the conclusion of the phrase. The stunned audience responds with a collective, audible gasp. Corelli then delivers the final climax of the aria with almost superhuman strength.

“At this point, the Parma audience breaks into sustained cheers, applause, and finally, rhythmic clapping, as they beg Corelli for an encore. It is not forthcoming–at least not immediately. But after the conclusion of the opera, an upright piano is wheeled on stage to accompany Corelli in a stunning rendition of the Neapolitan song ‘Core ‘ngrato.’

“I doubt that we will ever again hear a performance like this. First, it is unlikely that a tenor with Corelli’s remarkable gifts will come this way again. Second, even if he did, I can’t imagine any of today’s conductors allowing the kinds of freedoms Corelli takes with the score. Many will view that as a positive development–I do not.

“The remainder of the cast is fine, although certainly not on Corelli’s level. Virginia Gordoni is a vibrant, fiery Tosca who has occasional difficulty with her upper register. Attilio D’Orazi is a firm-voiced and malevolent Baron Scarpia. Through all of Corelli’s liberties and audience participation, conductor Giuseppe Morelli does an admirable job of holding the performance together.

“The booklet cover states that the recording is in stereo. I don’t believe that to be the case, but in any event, the sonics are quite clear, generally with minimal distortion in climactic passages. [The stereo spread is minimal.–BCS]

“The CDs contain more index numbers than typical for issues of this opera, with many Corelli highlight moments isolated for easy access and repeated pleasure. If you love Franco Corelli, and don’t already own this set, you will definitely want to acquire it at once. For those who have yet to become acquainted with the magic of this great, if controversial, tenor, I truly cannot think of a better place to start.”

“These two sets have been issued primarily with Corelli fans in mind—and well may they be satisfied with his viscerally thrilling interpretations of both Manrico and Cavaradossi, but in the case of Il trovatore the fact that we can hear five Italians in the major roles, virtually an impossibility today, is of even greater significance. It lends the performance an authenticity and flavour others simply cannot equal now, let alone surpass. Corelli, Barbieri and Bastianini can be heard separately in other sets of the opera, but hearing them together, along with the fine bass Agostino Ferrin, is a special treat, though it has to be said that Barbieri is to be heard to greater advantage earlier in her career on the Callas/Karajan version (EMI). Parutto is a minor figure by comparison with her colleagues: she sings with true Italianate sound, but is no stylist. Fabritiis is, as he always was, a splendid exponent of Verdi, energising the score from within. Apart from some distortion on the soprano’s louder notes, the sound is good.

“Corelli is once more in prime form in the Parma Tosca so it is hardly surprising that an encore is urgently sought by the audience. He turns down the offer but returns at the end to sing ‘Core ’ngrato’, much to the delight of the fans. Gordoni, an American in spite of her name, had an appreciable career in Italy and turns in a very decent performance as Tosca. D’Orazi offers an incisively sung, imposing Scarpia that few better. This is indeed a superior version to the most recent, that conducted by Muti on Sony, and well worth having.

“Indeed, I very much enjoyed both sets for their idiomatic delivery of words and notes.”

Go to additional reviews of this and other Corelli titles by Richard Fawkes in Opera Now.

The contents of this CD were transferred from analog sources using the improved high-resolution technology called DSD (Direct Stream Digital). DSD operates at one bit and 2,822,400 samples per second. The result sounds more like analog than conversions using Pulse Code Modulation technology (even at the emerging PCM standard of 24 bits and 96 kilohertz) because it creates fewer digital artifacts, such as glassiness, glare and harshness. CDs made from DSD conversions sound better than other CDs, so I’m able to listen to them hour after hour without audio fatigue.

All PCM technology incorporates filters that chop off high frequencies beyond the range of human hearing. Moreover, most PCM incorporates filters that “decimate’ the sound into 8, 16, 20 or 24 bits, which then must be “requantized.” All this causes most digital artifacts. DSD is better in part because it has no filters. DSD also conveys more sonic detail than PCM conversions. With DSD conversions, virtually all digital artifacts you may hear are added by your CD player.

Mastering was by A. T. Michael MacDonald and Rich Lamb of AlgoRhythms, New York City. –SZ

More reasons why our CDs have superior sound

Detailed essay about such factors as noise reduction, speed and pitch

Why We Are Releasing CDs — Finally

You're viewing: Tosca with Corelli, Gordoni From: $12.95
Select options