In the “Hostias” section Gigli utters an enchanting trill in mezza voce, followed by one sung covered, in full voice. Notice how his vibrato widens before both trills. That was how his throat prepared them. Pinza also loosens his vibrato just before he trills. Best of all is Caniglia’s trill; as it happens she doesn’t prepare it by increasing vibrato. Gigli comes in early twice (the first time is more noticeable). On the syllable “et,” in the phrase “et preces tibi, Domine,” he enters about half a beat too soon. “Et” is an eighth note but he treats it as if it were closer to a quarter note. Then in the next phrase, “tibi, Domine, laudis offerimus,” he comes in almost half a beat too early on the syllable “ti” of the word “tibi.” Were these early entrances mistakes or rubato? He stretches the remainder of the two phrases and makes up the time he took away from their beginnings. Serafin was preoccupied with rubato. Could he have been party to what Gigli did? If so, why didn’t he have the other soloists do something comparable? I’m inclined to think that Gigli simply came in early–although in general he does not seem to have had that tendency–on the grounds that no place else does he do a rubato this exteme or unusual. But if what he did was unintentional, why wasn’t there a re-take?

At the end of the “Ingemisco” there is a high B-flat on the syllable “dex.” Gigli is singing beautifully but then abruptly muffles the B-flat with heavy covering–perhaps this is a throwback to his terror at the time of his debut in 1914 of B-flats on the “EH” vowel. (For more on covering see Butterfly – linked below.)

Caniglia, Stignani and Pinza each could give Gigli lessons in legato at various points in the score, in the “Kyrie,” in particular, where he aspirates heavily. (All four soloists use far more portamento than today’s singers.) But in the “Lux aeterna” he suddenly gets religion about singing as many as six notes to a syllable without putting an “H” between them–and the result is exquisite. When he does aspirate it is to emphasize the notes in question.

Gigli’s tone is honeyed even when he’s not in mezza voce. Like Gigli, Pinza darkens his tone, in the “Lacrymosa,” for example. Stignani darkens hers in the “Libera me.”

In his middle voice Pinza sounds like an organ but is apt to disappear on low notes and to shift timbre on high ones. Some of the alto part lies below Stignani’s best tessitura. With Amneris, Verdi pushed lower female voices higher, into soprano territory. But in the Requiem the alto part is not in thirds with the soprano but in sixths, in the manner of some Bellini tenor roles. In any event, in the “Liber scritus” Stignani sounds fluttery and without core in her middle voice, but she recovers for the “Recordare.” Were the pieces recorded on different days? Caniglia does her most appealing work when singing as a bright lyric soprano, the side of her heard here. She gives a spinal chill on her opening high A in the “Kyrie.” She and Stignani blend stunningly in the “Agnus dei”–perhaps a consequence of having the same voice teacher, Agostino Roche. In the final “Requiem aeternam” Caniglia, far from being squally, as one may have come to think of her, has smalto (sheen) and squillo (ring or ping).

In the opening “Requiem aeternam” the chorus covers its sound, presumably to impart mystery. The recording’s principal weakness is that both chorus and orchestra sometimes are imprecise. The chorus drags behind the beat when it has to pronounce combinations of consonants, and the strings sometimes not only drag but also slur in fast passages. But the brass are thrilling in the “Tuba mirum.” Serafin’s slancio (oomph) animates throughout. Too bad he wasn’t conducting the Scala chorus and orchestra. Yet one wonders, why weren’t his own chorus and orchestra (those of the Teatro Reale dell’Opera) more accurate and better with detail? Was he not picky enough in rehearsal?

Not only is the acoustic of the Reale spacious, but it is at the same time both brilliant and warm.

The score of course is fabulous and repays repeated hearings. But its weakness from Gigli’s point of view, I would think, is that the tenor part doesn’t give opportunities for painting with the voice or for tenderness, rage or slancio. It does provide opportunities to be a good team player and to sing meltingly. In any event he sang it many times. On December 14, 1940, Caniglia, Stignani, Pasero and De Sabata performed the Requiem at Rome’s Basilica di S. Maria degli Angeli for an audience that included prominent Nazis and Fascists. An excerpt from this performance was used in a Fascist newsreel otherwise devoted to depicting Italian and Japanese military prowess. 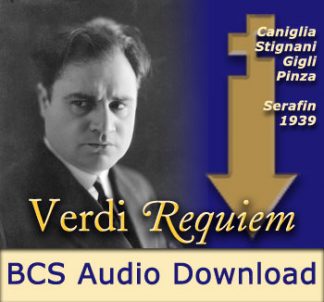