I came to be considered primarily an exponent of the music of this composer [Puccini], and it is true that I found his works peculiarly suited to my voice. The rôle of Mario Cavaradossi, however, is wooden and insipid; fortunately for the tenor, it is redeemed by the beautiful aria of the third act, ‘E lucevan le stelle’.

The very fact that the rôle was lacking in characterization presented me with a challenge. I was determined to do something original with it; and in part, at least, I think I succeeded. I had never been able to understand why it should be common practice among tenors to sing most of the third act of ‘Tosca’ in tones of joy and hope. It had always seemed to me that the music was meant to convey sorrow and melancholy. After studying the rôle carefully, I decided to break with tradition and interpret the music in what I felt must surely be the way that Puccini had intended.

Floria brings Mario the safe conduct and tells him he is free to leave the prison; but–this is where my interpretation began to diverge–Mario is unconvinced. He cannot bring himself to believe that happiness is within reach at last. Floria, he thinks, must be the victim of a cruel deception. He humours her lovingly with words of hope, but all the time, up to the very end, he is certain that these are their last moments together on earth, and that he is about to die. At no time can he bring himself to smile.

To me this interpretation seemed completely logical; at the very least, I felt, it was permissable. [Memoirs, p. 71]

In his first of three books, Confidenze (1942), Gigli stated:

No illusion for the man who looks in the face the end of every hope and smiles piteously because his beloved is unaware of the approaching tragedy. Cavaradossi is saying, “Because you want me to partake of your illusion, be happy, poor woman, I’ll play along. But for my part I have made my farewell to life.” [ Confidenze, p. 99]

Corelli too felt that Cavaradossi was an uninteresting role (so he told me). But both tenors had some of their greatest successes in it.

In the Act I duet with Tosca, Gigli’s Cavaradossi is teasing, sarcastic and charming. For the most part he doesn’t round or darken his tone, and he doesn’t cover to achieve chiaroscuro but only for technical reasons. He is in radiant voice but for no reason aspirates some of the most beautiful lines in the passage beginning “Quale occhio al mondo.” On occasion he commits what earlier voice teachers would have considered a transgression: a violent offset or glottal stop, involving releasing a tone with a grunt instead of fading it away into silence. Consider “una persona cara,” which he sings in mezza voce (Act III). I mention this example not because it is flagrant but to illustrate that Gigli too was guilty of a fault commonly associated with Caruso and Corelli—evidence of disregard for old virtues.

Caniglia has a big middle and brilliant top. Sometimes she imparts an inappropriate accent on an upbeat by beginning the the vowel “Ah” with a glottal stroke. Sometimes she bangs into a note in the middle of a phrase without preparing the accentuation with a crescendo, causing the music to sound choppy. Sometimes her legato is poor. She feels “Vissi d’arte” but not infrequently is flat. She is at her best in the lyrical sections of Act III and is gripping in her intimate urgency, when she is speaking to the dead Cavaradossi.

As Scarpia, Armando Borgioli is less domineering and brutal and more lyrical and sweeter than either Gobbi or Guelfi. Borgioli lacks their presence and Gobbi’s variety of inflection. To sound heavy enough he sometimes resorts to darkening. Variety of inflection is not lacking in Nino Mazzioti’s Spoletta; he knows how to valorizzare la parola— to imbue words with meaning.

De Fabritiis is propulsive–a quality I don’t associate with his conducting from the 1950s. His running time is only 1:44 minutes, whereas that of his 1956 Tosca film with Corelli is 1:51 minutes. Of course Gigli seems to favor fast tempos, Corelli the opposite. Was this a result of the difference in their breath spans? 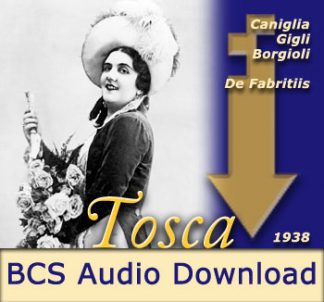