For downloadable .M4A or .MP3 files, Total size: approx. 210MB.
Downloads are not eligible items in connection with our 6-for-5 offer.

Note: This performance is broken into three act-long tracks, not individual arias.

(The article below is drawn from the interview with Frazzoni for the film Opera Fanatic in 1996 and on additional interviews in 1999 and 2007.)

“Throughout the first act of Butterfly I used the voce infantile.”

Born February 27, 1927, Gigliola Frazzoni appeared in Bologna, Rome, Venice, Turin, Palermo, Parma, Verona, Munich, Stuttgart, Wiesbaden, Zurich, Geneva, Bordeaux, Cairo, Dublin and Vienna. She made her Scala debut in 1955, replacing Callas in Chénier. There she also sang Cavalleria, Fanciulla, Butterfly and Pagliacci. Her recordings include Tosca, Fanciulla and the world premiere, at La Scala, of I dialoghi delle Carmelitane. Her Minnie was filmed.

An uneven singer with an ample, round, dark sound, at her best she had a warm vocal personality–tender, endearing, adorable, sensuous, feminine, passionate, cuddly. She was a Minnie who laughed, loved, raged, suffered and exulted–electrifying. She was wild at “Vieni fuori! Vieni fuori!” in Fanciulla, Act II. She sometimes sang slightly flat. She was insecure on high B and C.

I was a member of the Piccola Italiana [a Fascist girls organization]. In 1939, when we were at summer camp in Riccione, the Duce arrived by sea, was rowed ashore and came to visit us, in white shorts and dressed entirely in white. He had a large entourage, including his daughter Edda, who also was dressed in white. We were lined up to meet him. I was up front and sang the song of welcome. Mussolini applauded and took a skinny little girl who was at my side in his arms. He caressed me but didn’t take me in his arms because I was a fatty.

My teacher, Giuseppe Marchesi, took me from Bologna to Milan to audition for the agent Liduino. In another part of the office Serafin was making up the cast for Francesca da Rimini. He said, “This voice interests me. Don’t send her away.” He signed me for a small part, Samaritana. Thus I made my debut, in Pesaro in 1947.

Later Liduino blocked my career because I represented a threat to someone he was protecting. Once Del Monaco and Gobbi were in Chicago for Fanciulla. Steber was supposed to sing Minnie but was sick–in reality she was on a bender–and they recommended me. Liduino called me and asked me how much I wanted. I wasn’t accustomed to big fees. To make my American debut, in my opera, I would have gone if they had covered my expenses. I told Liduino I left the money up to him. I was afraid of flying but for that occasion was prepared to. I bought a valise. When nothing happened my husband called Liduino’s office and was given a runaround.

A week later I received a letter from Del Monaco saying he was ashamed to know me because I’d asked for so much money–Liduino had demanded $3,000 a performance although I would have gone for $300. He didn’t want me to go to America because he managed Stella and a number of other sopranos. Steber mimed the performance with someone singing from behind the curtain. Bing flew from New York to Chicago to hear me, in vain.

As a result my good friend Tebaldi ended up performing Fanciulla at the Met and recording it for Decca. She wanted to do everything. She was one of the greatest singers, with a sweet voice, an exquisite legato. She was wonderful in Lohengrin, Otello, above all, and was even a good Maddelena, but she was unsuitable for verismo. (I would have been a bad Desdemona because I needed to run around onstage.) Her temperament was too controlled for Minnie and she was too static onstage. Minnie has to be violent at moments. She was too sweet for that.

The Fanciulla recording was to have been made at La Scala, with Votto conducting. But when he insisted, “I want the cast we had at La Scala,” Decca, wanting Tebaldi, moved the recording to Rome and replaced him with Capuana.

In 1958 I was scheduled to do seven performances of Butterfly at La Scala. They were so successful that the theater added 10 additional ones, whereas Callas only got to do 14 of Traviata.

In the first act of Butterfly you must seem fifteen. Butterfly and Violetta each require two voices. I try to adapt my sound to the situation. I had the discipline to decline engagements, to prepare myself for certain roles. When I performed Butterfly I only did that part that year because I had to make my voice smaller and childlike for the first act. But in the second act I became a spinto and threw out all the voice I had.

I used chest voice when the drama called for it, for example, at the end of “Voi lo sapete”–the way Bruna Rasa did. The word “piango” calls for it. I reconciled chest voice with my mask placement. You really shouldn’t dig into those notes. They should sound natural, not forced. [She demonstrated the phrase with great passion and a sob at the tied note on “piango” but used chest very lightly if at all, I thought.] Bruna Rasa once came backstage to congratulate me after a performance. Incidentally, the poor thing went crazy because of syphilis.

The first requirement in singing is to have temperament and sensibility. You must be happy, joyful, full of love. In Puccini every phrase teaches you to sing with happiness and humility. Puccini understood women’s emotions so well. I would have gone to bed with him and done the same things I do with my husband. [Licia Albanese told me the same thing.]

There are no more Giocondas. Today Bohème-type voices sing heavy repertory and they lack impact as Santuzza. Voices that would have sung Micaëla or Liù end up doing Gioconda and Fedora.

What I regret most of all is not having any children –I would have liked to have had six.

Stefan Zucker: How did you come to record Tosca for Cetra?

Gigliola Frazzoni: One day Tagliavini said to me, “I want you to be Floria Tosca on the recording I’m going to make with Cetra.” He took me to them.

We ended up recording the entire opera between 10 AM and 1 PM. Tebaldi got a whole month in which to record Fanciulla, phrase by phrase.

Frazzoni on Adami Corradetti: She made me feel a lot of tenderness.

On Simionato: In Cenerentola she sounded like a soprano leggero. She had great facility with high notes.

On Stignani: She was a mezzo but she sang the high C in Norma. Callas told her, “But why do you put in the C? Only I do it.”

On Gavazzi: She was one of the last with great temperament. She also had a beautiful voice.

On Olivero: Her recording of “Ah! fors’è lui…Sempre libera” is unsurpassable and was an inspiration to me. Those who do Adriana today are ridiculous compared to her. But unfortunately she was one of those singers who had to do everything, and so she even performed Fanciulla. Her Minnie is of no interest to me.

On Gencer: Pederzini, Zeani, Gencer and I were in the world premiere of Dialoghi delle Carmelitane, at La Scala (January 26, 1957). Because of the large cast, we singers had to share dressing rooms, with one exception–the star. Zeani and I took a dressing room together and left the one for the star to Pederzini. But Gencer grabbed it although she certainly was no more important than we were. Perhaps at that moment we were singing better than Pederzini, but she was a legend with a great career behind her, returning to La Scala after an absence of many years. We young singers could not have imagined we’d be in the same cast with her–an honor. The star’s dressing room plainly should have gone to her, but Gencer refused to give it up.

Later she got to sing all those Donizetti and other revivals because she was Gavazzeni’s mistress.

On Corelli vs. Del Monaco:

SZ: You sang Fanciulla with both Del Monaco and Corelli. Please compare them.

GF: Del Monaco was a normal person. He didn’t create problems for others. With Corelli you never knew if he’d sing or not. Offstage he was unbearable. “I don’t feel well–this bothers me, that hurts me.” After performances he disappeared. Del Monaco instead was a tranquil man. He was very serious about his singing. He listened to himself while he sang. Offstage he was like a brother. He was happy, he gave joy. After the performance he was able to sing through the entire opera again in full voice in the hotel, after he had eaten. His wife, Rina, was a dear, good person. Del Monaco had a beautiful voice, but his singing was more calculated.

Before Corelli came to my home town, Bologna, to sing Fanciulla, I told my fans not to give him a hard time. I said to him, “My fans love you too!” I was afraid he would cancel.

Corelli was the Callas of tenors. His voice was not beautiful but it had an allure that excited the public. Callas had a pathos, something great inside her, that Franco also had. His voice gave me goosebumps. He threw himself into the performance. He was Johnson–he was more true to the drama.

He sang, “Minnie, Minnie” with such tenderness! Onstage I was in love with him, offstage less so because he was impossible.

After performances with Corelli women said to me, “He touched you! That must have been so thrilling!” 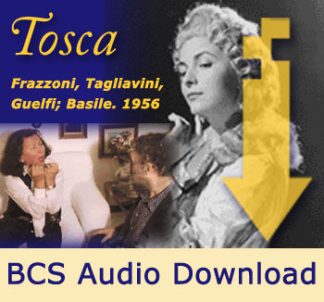