Downloadable .M4A or .MP3 files: Total size approx. 130MB.
Downloads are not eligible items in connection with our 6-for-5 offer.

Del Monaco and Corelli often sang with darkened tones and always covered all notes from the passaggio on up. Giuseppe Di Stefano (1921–2008) sang open at least to high B-flat and didn’t darken. Voice teachers and other singers almost universally have pilloried him for singing open above the passaggio –the standard view being that it is not unhealthy vocally to sing open in the middle but it is to do so above the passaggio. “The passaggio for tenors is on F or F-sharp,” they say. Well, there are just too many counterexamples. In his autobiography, L’arte del canto, Di Stefano claims his passaggio was on high B-flat. That would put those much-criticized open Gs and As in the middle voice. Alfredo Kraus appeared on “Opera Fanatic,” in October 1987, and held forth against covering. He and I agree that singing open in or above the passaggio is not necessarily unhealthy. At issue is how you do it. In the words of 19th-century voice teacher Giovanni Battista Lamperti, in Vocal Wisdom: The Maxims of Giovanni Battista Lamperti by William Earl Brown, “If a tone is beautiful, why cover it?” (There is an alternative to open singing and covered singing, closed singing. For example, tones in speech are closed.)

Del Monaco and Corelli were obsessed with technique. Di Stefano did his best singing when he didn’t think about technique. (So he wrote in several places in L’arte del canto.) Yet from time to time you can sense him placing his voice in the mask or pressing in at the diaphragm. Presumably this is what he learned from his principal teacher, Luigi Montesanto (a baritone who had sung with Caruso). Like Tito Schipa, Di Stefano lost his top notes early. Yet they each are among the most communicative of singers.

As a singer of songs Di Stefano draws you in. He is more personal and intimate than any other tenor–with the exception of John McCormack and Schipa, neither of whom covers.

Di Stefano has had no successors. Although Carreras and Pavarotti pay homage to him they sing quite differently. For one thing they cover above the staff.

Why did Di Stefano’s voice decline? Starting out in the 1940s as a lyric tenor he tried to beef up his voice, beginning in the 50s, and ended up singing mostly in chest voice, with very little head resonance. In the words of G. B. Lamperti, “Using low resonance alone has ruined every voice that tried it.” Del Monaco’s top, in my view, eroded for the same reason.

Vocal acting is of two kinds: word emphasis and tone coloring. Acting through singing is very similar to acting through speaking, with the difference that sung acting is regimented by the music. Acting through speaking or singing involves coloring words, imbuing them with meaning, deciding which ones to de-emphasize, which to italicize. Italian singers used to speak of “valorizzare la parola”–to give value to the word. According to Di Stefano, in L’arte del canto, “The art of singing really consists in coloring the word with expression. To do so, you must dominate your natural instrument, the voice.” In a 2001 Gramophone interview (“Giuseppe Di Stefano at 80”), given to Patrick O’Connor, he said, “It’s no good just singing the music. You have to sing the words, and sing them from your heart.”

Corelli’s view was different. In general his interpretations were not word-inspired. He told me the words for him were less important than what he felt from the music.

At their best Corelli and Di Stefano each sang with fuoco sacro–the sacred flame. In particular, some songs by Ernesto De Curtis flushed it out of them–“L’autunno” and “Canta pe’ me,” in Di Stefano’s case, “Tu ca nun chiagne,” (performed on Corelli in Concert) in Corelli’s.

This Pagliacci is one of Di Stefano’s most impassioned opera performances. 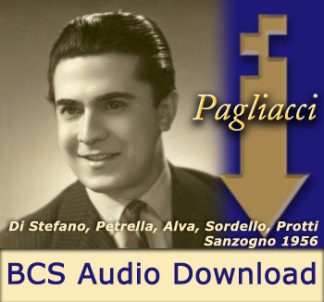