In his 1934 Pagliacci recording Gigli focused on producing sounds of velvet. In his 1942 film, Ridi Pagliaccio, and in his 1952 recording he concentrated on expression. In the later versions he is more involved with the words. His singing is more beautiful in the 1934 version but less gripping. These developments exemplify his evolution.

In the 1934 version Gigli darkens his vowels to impart a satin-smooth finish to his tone and to sound like a heavier tenor. Even so his voice at moments is a little light and thin for the role.

Iva Pacetti is an early example of a modern soprano; she too darkens vowels in the manner of, say, Katia Ricciarelli, Mirella Freni in the second half of her career and more or less all women today. (For a discussion of this trend see Butterfly.) But she does know how to valorizzare la parola–to imbue the word with meaning.

Mario Basiola heavily covers his top notes and puts his voice far forward in the mask. His Tonio is more human and sympathetic, less bestial, than Gobbi’s. Basiola too darkens vowels as does Leone Paci, the Silvio.

Combined, Gigli’s, Pacetti’s, Basiola’s and Paci’s darkening is melliflous but a little dull.

One who doesn’t darken is La Scala’s characterful comprimario tenor Giuseppe Nessi. He has a beguiling mezza voce, but his tones often are a little spread. 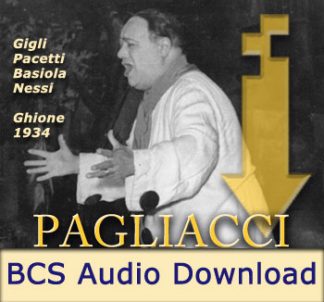