New! Save when ordering this title as part of our 5 Callas Operas value set!

How Is Callas Different?
by Stefan Zucker

Is Callas different fundamentally from other singers? Well, she is different from nearly all other recorded female singers in that she sometimes sings with scatto (punch). Tones with scatto have swift attacks. When she sings this way her tones are incisive—they reach peak volume very quickly. This quick rise time enables her to minimize loss of volume on short notes and make a great deal out of, say, the 16th note in an emphatic passage with a dotted eighth and a 16th.

Contrast Callas’s attacks with, say, the slow, stately onset of Kirsten Flagstad’s tones. In “Ho-jo-to-ho,” in a live 1936 San Francisco Walküre, she sounds lethargic. In part the problem stems from imprecision of rhythm, in part from sluggishness of attack. With Flagstad it takes so long for a note to reach full volume that short notes count for very little. Her great voice soars on sustained notes in slow passages but is not all that telling on the 16th note in an emphatic passage with a dotted eighth and a 16th. In her “Ho-jo-to-ho” the short notes are disproportionately soft. They are over before they can build in volume, because of the slowness of her attack.

Callas isn’t the only one to declaim with scatto. Giovanni Martinelli, Lauritz Melchior, Giacomo Lauri Volpi, Mario Del Monaco and Franco Corelli sing with it, but in general women didn’t—and don’t. Notice that Callas sings with scatto without having recourse to a glottal attack, unlike Maria Farneti and, sometimes, Magda Olivero and Montserrat Caballé. (Click the product link below to see Corelli sing with scatto, on Corelli in Concert.)

Singing with scatto can be too vigorous for vocal health. One can exhaust the low middle voice and rob the entire voice of bloom. Indeed that happens a little bit in this Medea. (Olivero told me the part requires a heavier sound than Santuzza or Minnie, that it is massacrante—it butchers you.)

Never mind. Callas sings Medea with enough pathos and fury to give you the catharsis you need and deserve. (So did Olivero although her interpretation suffered from lack of chest voice.).

Scatto also can be abused. Think of the Bayreuth bark.

Callas’s rhythm is more vigorous than most other singers’, and her rhythms within full measures are more accurate. In the final part measure at the end of most phrases, however, she tends to overhold and unduly accentuate the last note, where that note is the resolution of a dissonance, and thereby violates phrase structure. In her Juilliard master classes she ascribed the fault to bad habit. In this Medea, however, there are no examples of this as flagrant as in some of her Normas.

Her dynamic span within a phrase is more extensive than most others’, so that when a phrase climaxes she often has prepared the climax with a louder crescendo. Many of today’s singers have solid musical backgrounds. They play instruments, know music theory and sight read. But the result often is glib.

Callas, on the other hand, frequently clarifies the dynamic shape of a phrase by use of crescendo. (Beverly Sills’s phrases are at the opposite extreme—they are stagnant dynamically, that is to say, they lack sufficient rise and fall of dynamics. French singers also are apt to do little with dynamics, so their phrases don’t sweep ahead.)

In heavy music such as Medea, particularly in her earlier recordings, Callas covered extensively.

Sung tones come in three varieties: closed, open and covered. In spoken French, for example, there are two “ah” sounds: the “ah” in “jamais” is closed, that in “théâtre” open. Covering involves darkening the tone and modifying vowels almost as if some were schwas, like the “uh” sounds in “America.” Speech in Western languages mostly is closed. Open speaking and covered speaking can sound artificial. But used judiciously open singing and covered singing can enhance expression.

Callas the tigress sang with covered tones. The other Callas’s mostly sang with closed tones.

For more on covering see my Franco Corelli and a Revolution in Singing: Fifty-Four Tenors Spanning 200 Years, vols. 1 and 2.

Her interpretation of words and her tone coloring

Most commentators have focused on Callas’s interpretation of words and her tone coloring. Some other singers mined this vein of expression at least as well. Adelina Patti’s “Ah, non credea mirarti” (La sonnambula) surpasses Callas’s not only in vocal acting but also in subtlety of rubato as well as in “inwardness.” Iris Adami Corradetti’s recordings of arias from Madama Butterfly, Francesca da Rimini and Lodoletta are as musically expressive as Callas’s best work and outshine it in vocal acting and tone coloring. I find Olivero’s best vocal acting still more affecting than Callas’s. The list goes on: Vera Amerighi Rutili’s “Pace, pace, mio Dio!”, Gilda Dalla Rizza’s best, Giuseppina Finzi Magrini’s few recordings, Ester Mazzoleni’s best and Claudia Muzio’s best come to mind. Most of these singers spent their careers in Italy and did not record extensively, so they are remembered less well. During this series we’ll explore some of their work.

She doesn’t lag behind the beat

Callas had another quality rare among singers: she didn’t lag behind the beat. Faced with consonant clusters such as “str” most singers end up putting one or more consonants on the beat instead of the vowel and thereby sound late. Callas takes the time, even for consonant clusters, from the preceding beat, so that each beat coincides with the onset of a vowel. (Yes, there are counterexamples; she wasn’t perfect.)

Leyla Gencer on Callas, transcribed from the outtakes to the film Opera Fanatic: Stefan and the Divas

Stefan Zucker: In the late 50s you often were in the second cast. Callas was in the first. What do you think of her?

Leyla Gencer: She had the most imperfect voice in the world, but this doesn’t mean anything. She was full of flaws, but she had the sacred fire. She was wonderful. Where can you find her equal today? My magnificent colleague Price sang wonderfully, but could she transmit what Callas could? 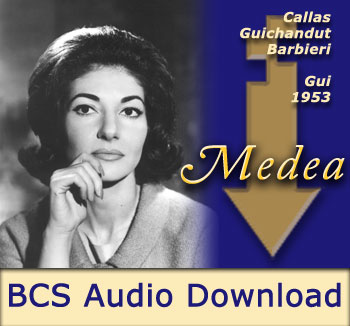