Downloadable .M4A or .MP3 files. Total size: approx. 220MB.
Or Webcast: $6.95
Downloads are not eligible items in connection with our 6-for-5 offer.

Olivero was born March 25, 1910 in Saluzzo, near Turin. She was one of a handful of Italian singers who didn’t come from peasant stock; her father was a judge and she was educated. Because Olivero had come with a recommendation from an important magistrate, she was granted, at her insistence, a second audition after having been rejected for admission to a conservatory. She made her debut in 1932, as a lyric soprano, her first lead role, Lauretta in Gianni Schicchi. In 1933 she made her La Scala debut, in a small role, Anna, in Nabucco. Within a few seasons, together with Mafalda Favero, she was Italy’s leading lyric soprano.

In 1941 Olivero married industrialist Aldo Busch. For ten years she performed only intermittently, at concerts to aid charities. She had two miscarriages.

When Cetra was going to record Adriana in 1950, Olivero said she wanted to sing the part. Cetra was interested but concerned because she had not performed for nine years. The people there wanted to ask her to audition but didn’t dare; instead they requested a letter of recommendation. She responded, “My career is my recommendation.” Cetra gave the part to Carla Gavazzi, causing a rift between Olivero and RAI/Cetra. (She had recorded Liù for their complete Turandot in 1938.) In 1951 she made her comeback to the stage. But she did not record a complete opera for five years, during a period when a great many sets were produced. Perhaps as a result, she appeared more often in the provinces than in leading theaters.

What presumably would have been her repertoire at RAI/Cetra was taken over by five sopranos: Rosanna Carteri, Gigliola Frazzoni, Gavazzi, Clara Petrella and Marcella Pobbe. (We are presenting them in our downloads and Webcasts — see category links in the sidebar.)

Olivero: “I had started years before any of them. By 1975 they all had stopped singing or were washed up. What was I doing? Making my Met debut, as Tosca.” (Olivero came to the Met because Marilyn Horne had put in a good word with General Manager Schuyler G. Chapin.) She felt animosity toward Gavazzi, in particular.

In 1983, upon the death of her husband, she stopped performing. Prostrated for a number of years, she came back to give concerts and in 1993 recorded Adriana and sang on TV. Thanks perhaps to her vegetarian diet and practice of yoga, she remained in good health.

Verismo sopranos were of two varieties: the fragile young girl with a slender shiny tone and the tempestuous mature woman with a large dark voice. (Sopranos today use an uninflected, charmless, all-purpose tone.) Over the years Olivero’s sound changed from the first variety to the second. In an Iris recorded for Cetra in 1956, her sound is far more suited to the character than in her Amsterdam Iris of 1963. By then her sound had lost its youth and had darkened. In her 1960 film of Tosca (Bel Canto Society video #685) she also is uncommonly gentle and feminine. Those who saw her only in the 70s could not know of her cuddly, girlish aspect. As she aged she grew still more intense emotionally.

Olivero’s reviews in Italy were laudatory. One critic called her “more expressive and musical than Callas.” But in this country, at the time of her Met debut and her concerts in 1977 and 1979, critics such as Alan Rich and Barton Wimble wrote of her with derision, regarding her vocalism as like Florence Foster Jenkins’s, her style as exaggerated and campy.

Olivero was coached by Cilea and a number of now-obscure verismo composers and is the last singer with such background. For me she distills and exemplifies the tradition. Of the singers in the film Opera Fanatic: Stefan and the Divas, she is the one who coached with old maestros such as Luigi Ricci the most. From Gemma Bellincioni to Lina Bruna Rasa, the verismo era was transfigured by searing vocal actresses. Unlike Olivero, few also were consummate musicians able through rubato (lengthening or shortening notes or groups of notes) to convey the music’s tension and relaxation. More, hers is “il cantar che nell’anima si sente” — singing that is sensed in the soul. Her London/Decca Fedora, made in 1968, is the last emotionally important commercial recording of an Italian opera. Indeed, no other opera video ever produced is more important emotionally than BCS’s Magda Olivero: The Last Verismo Soprano (Bel Canto Society video #115, out of print).

I find Olivero more consistently satisfying than other divas although on this or that occasion I may prefer one of the others. Given a choice between Callas and Olivero, I’d actually pick Olivero. She has greater warmth and depth and is more moving. She is the mistress of the death scene.

In 1984 the radio program “Opera Fanatic” held two favorite soprano contests: Favorite Soprano of the Century and Favorite Soprano of Our Time. In the former Olivero came in third, after Callas and Ponselle. In the latter she came in second, after Caballé. Olivero was the only one who placed well in both contests. Unlike the other major contenders, she had given only a handful of performances in the U.S. (Detailed results for these two contests are reported in the first issue of Opera Fanatic—the magazine, not the catalog.)

Olivero sounds older than Puccini creators Cesira Ferrani or Rosina Storchio. Storchio’s personality and emanations gave Puccini no choice: he had to fall in love with her. In effect she perhaps was like a young Audrey Hepburn.

PARS Media, the production company that filmed Opera Fanatic, is from Munich. One of the crew remarked, “Oliivero doesn’t seem Italian but German. She’s cold and severe, like us. She could be a school teacher from a Berlin suburb.” Well, she is not adorable. Nor is her voice, with its edgy vibrato on high notes. But her art is endlessly satisfying. 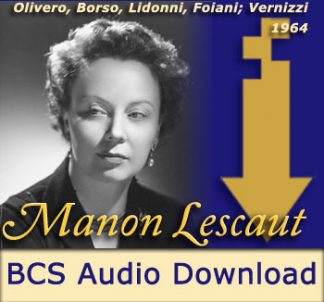