On March 15, 1947 Giuseppe Di Stefano made his Scala debut in Manon and drove the audience into a frenzy with sweet tones, diminuendos and passion. The performance made him a star overnight.

The Manon was Mafalda Favero, an established star. Whereas Georgette Bréjean-Silver and Germaine Féraldy sang the part with a delicate femininity, Favero is earthy.

We present the portions of the performance that were recorded.

Magda Olivero Interviewed by Stefan Zucker, Part 5
transcribed from the outtakes to the film Opera Fanatic: Stefan and the Divas (linked below)

Magda Olivero: Di Stefano sang all the operas he never should have sung [laughs]. I sang Massenet’s Manon with him [five performances at the Arena di Verona in July-August 1951 and two in Modena in January ’52], and he was a fabulous Des Grieux because he had been gifted by nature with an incredibly beautiful voice, exceptional good looks and a warm and expressive personality. He was the character. But he never had technique. He sang his high notes from back here [she emits a Mickey Mouse squeak] broken, really broken. He never had studied, nor did he want to study later, to learn something. “No, this is the way to sing: you open up the mouth wide and you send the high notes back to the rear of the throat.” Then the murderous repertoire he took on exacted its toll on that beautiful voice.

Stefan Zucker: Was it difficult for you to sing with Di Stefano because he hadn’t learned the parts?

MO: With Di Stefano? No, no, no. He knew Manon and Tosca. He had sung them before, and he knew them well. 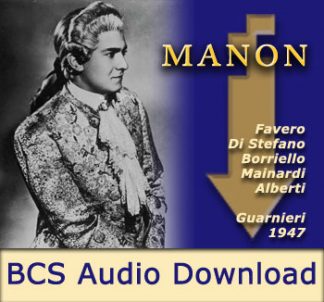