Downloadable .M4A or .MP3 files. Total size: approx. 285MB.
or Webcast.
Downloads are not eligible items in connection with our 6-for-5 offer.

Magda Olivero interviewed by Stefan Zucker, transcribed from the outtakes to the film Opera Fanatic: Stefan and the Divas

Stefan Zucker: At the beginning of your career, how was the sound of your voice different from what we know today?

Magda Olivero: Well, it was a very light voice, very, very bright. I was very young, almost a soprano leggero, and emphasized the highest notes. I had a considerable range–I could hit F above high C with complete ease. I had the tessitura of the soprano leggero.

SZ: How did you move on to a heavier repertoire?

MO: It was instinctive. In fact, after my first Gilda, the baritone Mario Basiola said to me, “Signorina, you will not stop here. With your temperament and that voice, you are going to go much farther. Your Gilda is beautifully sung and is warm and human, but you will not stop here.” And he was right. I instinctively was attracted to those roles that are based on a solid theatrical work–Tosca and Fedora of Sardou, for example. A character that could act, that I could live–that’s what I sought. A character that was static, that was primarily to be sung well, I could admire, but it wasn’t for me.

SZ: Was it a surprise for you, to sing the part of Elsa at the Rome Opera?

MO: It certainly was. Imagine being engaged for Philine and ending up singing Elsa! Maestro [Tullio] Serafin said I was “an exceptional soprano leggero.” He had me learn all those roles and told me that that winter I would sing Philine in Mignon at the Rome Opera. And as you know, Philine is a very high role. I set to work studying with Maestro [Luigi] Gerussi, perfecting my high notes for this role. When my contract arrived–it was for Lohengrin! My dear Maestro Gerussi said to me, “Maestro Serafin should not have tricked you in this way. But let’s see if you feel strong enough and your nerves are steady enough to win this gamble. I am with you all the way. We’ll study without stopping, like two madmen. We’ll try the impossible. But you must accept that contract.” And I did. But Elsa is all in the middle voice. Since I had concentrated on the high register, the center of my voice understandably had become weak. My maestro said, “I’m going to prescribe a program that either will make you or break you. I’m going to give you a work where you have to sing constantly in the center, with some high notes, but with a tessitura similar to that of Lohengrin.”

Can you imagine what he chose for me, who was used to singing the lightest roles in the world? Butterfly! I said, “Maestro, if that’s what you recommend, I have both the courage and the nerves–let’s try it.” He said, “It may not work.” I said, “Maestro, if it doesn’t work, so be it.” So I began with Butterfly, with vocalises, little by little bringing my tessitura down, getting used to singing sul fiato [on the breath]. It all went amazingly well. I don’t remember exactly how many months I studied Butterfly, but even before singing Elsa I sang Butterfly in the theater. It was such a success that those who were present still remember it.

Then I went to Rome for Lohengrin, which I had studied so assiduously with my maestro. Wagner is a completely different kind of singing–rigid, no portamentos. But I really had prepared it well. When I arrived in Rome, I found they had given the first performances to another soprano, Franca Somigli. I was given the final two performances. They gave me a substitute conductor, who went over the entire score with me and said, “Ah, you know it. Good.” I certainly did. Then he showed me a model of the set and told me, “In the first act you enter here, and at the end you exit there. In the second act, you enter here and go up to there, then go down there and exit there,” with the same kind of directions for the third act. That was my stage rehearsal [laughs]. No orchestra rehearsal, nothing! In other words, everything necessary to insure a fiasco.

I was very thin, and in that white dress, with my long braids, I looked like a stringbean. Looking down the staircase, I saw celebrated artists, such as Tancredi Pasero, horses onstage and this imposing set. At that moment I suddenly felt completely alone, and I asked, “Who’s going to help me?” Fortunately my father and mother had given me great faith, and I thought, “I’m not alone; God is always with us.” That gave me such strength, such courage, that I descended the stairs calmly, stepped to the front of the stage and began Elsa’s opening aria. Afterwards, the tenor, [Giovanni] Voyer [1901-76], said, “I don’t think I ever have been so moved. This girl, who never had seen any of us and whom we never had seen, appears suddenly out of nowhere to sing Elsa, without for a moment causing us any problems, musical or dramatic.” In fact, from that moment on, Maestro Serafin–I dare to say–adored me. He understood how much courage I had to agree to sing Elsa instead of Philine. I didn’t have an easy career. I always found obstacles in my way.

SZ: What had happened between you and Serafin?

MO: Those are delicate things, and, even though Maestro Serafin is dead, I never would permit myself to speak about them, given how much I owe him and how much he taught me. [Allegedly she had rebuffed his advances.] The famous aria from Traviata [“Sempre libera”]–I owe my facility in singing it to him. He said, “Remember this aria is like an overflowing cup of champagne.” With that image I understood everything and sang it with great slancio [oomph], with a nervous energy, which is the essence of Violetta.

SZ: You spoke of the obstacles you had to face. What are the five worst things that ever happened to you?

MO: Perhaps as a young beginner I irritated certain more established artists who felt they were more important than I. Along comes a youngster who could represent a threat to them, and they try to get rid of her, discreetly or otherwise {laughs]..

SZ: Who were they?

MO [a bit irritated]: In all honesty I’ve never done anything nasty or discourteous. In fact, all my colleagues–sopranos, mezzo-sopranos, tenors, baritones, basses–loved me because they knew they had a friend onstage, not an enemy ready to hold a note longer or play any kind of trick that would put them in a bad light. They all knew I was ready to help them if necessary, not create difficulties. For example, I was supposed to sing Risurrezione, a work I loved very much. Then twice I had to return the contract because another artist wanted to do it.[laughs]. The third time around, that artist fell ill, and they called me hurriedly to Rome, where I finally got to sing Risurrezione. Another time there was an Adriana that I very much wanted to sing, but they engaged another soprano [Carla Gavazzi], one who had been singing for many years, and I remember that I worked off my anger by walking through Rome for hours and hours. And then it was over. I’ve never harbored resentment against anyone because I always have tried to view the situation from the other person’s side as well as my own. This is an excellent way to understand and overcome the anger of certain moments.

SZ: It seems to me there are many possible interpretations of “Avanti a lui.” You have made a choice….

MO: Of course. You always have to make a choice–you try to make the best one. And this through an introspective study, trying to…. Tatiana Pavlova taught me that when there are these phrases to be spoken, not sung–for example, in Mefistofele, “Mi fai ribrezzo” [You disgust me], you do the opposite of singing–you tighten your arms and shoulders, like this [demonstrates]–and then you act, declaiming on the breath. But with this constriction, this rigidity, the voice comes out in a different way.

SZ: Can you give us another example?

MO: Let’s see–you can say, “E avanti a lui tremava tutta Roma” in a normal manner, like this, or you can say it this way [blood-chillingly], which is much more appropriate to the situation. Faced with death or a dead body, you never would utter it in a matter-of-fact way. It’s not fitting. Furthermore, you have to say it sotto voce, so that it isn’t heard by those in the halls of the Palazzo Farnese. This way it’s Tosca’s thought: “Look at him, dead. And to think that all Rome trembled before him. Now I’ve killed him. He’s lying there, and now no one has to tremble before him.”

MO: In that same way–on the breath. I never like to hear it shouted–“Muori! Muori!” [shouts]. The poor wretch is dying. There is only Tosca’s hatred and her joy that he is dying. Before, when he cries, “Aiuto! Aiuto!” she utters a reasonably loud, vehement “Muori!” But when he falls and she goes over to look at him, she says “Muori! Muori!” softer and softer. There’s no need to proclaim it. She’s just a few steps away from him, and he’s expiring, so she puts all her hatred into these words.

Click here to read interviews with Olivero and Simionato on Bruna Rasa.

(October 27, 1962, Orchestra and Chorus of the Concertgebouw;
Fulvio Vernizzi, conductor) 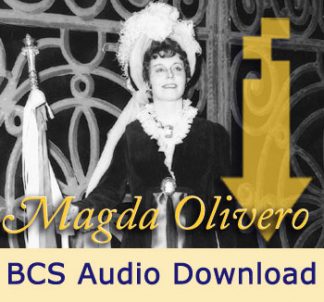