Downloadable .M4A or .MP3 files. Total size: approx. 260MB.
or Webcast: $6.95
Downloads are not eligible items in connection with our 6-for-5 offer.

Gigli’s Use of Closed, Open and Covered Tones to Achieve Chiaroscuro

The darkened age of soprano singing

Soprano singing has changed in various ways during the last 70 years. Here’s one aspect, illustrated by Mirella Freni and Katia Ricciarelli from the 1970s onward. Their sounds were very different from those of most Italian sopranos prior to W.W. II. Those women for the most part didn’t sound mellow or creamy. (Claudia Muzio began to cover her tones as she aged, and Rosa Ponselle covered from the start, but they were exceptions, as were Iva Pacetti and Mafalda Favero, who rounded or darkened, along with such Germans as Tiana Lemnitz and Maria Ivogün.) Most pre-war Italian women didn’t round or darken their tones, as did Freni and Ricciarelli.

Freni-and-Ricciarelli-like sounds may fall kindly on the ear but the price is monotony. Unrelieved rounding or darkening limits expression and irons out tonal nuance.

Rounded or darkened sound is less youthful. To convey girlishness Freni herself sang Micaëla with an unrounded or undarkened sound, heard on a Carmen (linked below). But that was in 1959. Iris Adami Corradetti taught her pupil Ricciarelli to round or darken. But in recordings made in 1940 Adami Corradetti herself did little or no rounding or darkening. In her recordings from the 50s, however, she did. These singers presumably were trying to accommodate modern taste: rounding or darkening and to some extent covering are now expected worldwide. But undarkened, unrounded, uncovered sounds sustain interest better. Listen to Bianca Scacciati, Adelaide Saraceni, Maria Carena or Augusta Oltrabella, none of whom rounded, darkened or covered. If you’re not accustomed to them, you may find their top notes acerbic and even piercing. But the result is more characterful.

At the opposite pole from rounded or darkened singing is the voce infantile, a “white,” childlike sound, useful for expressing innocence and fragility. Toti Dal Monte, Lina Pagliughi and Maria Zamboni are three who always sang with the voce infantile, sometimes with a charming and playful result otherwise unobtainable. Tones sung with the voce infantile are open, and open tones sustain interest (whereas covered sounds in and of themselves do not). Even so, the use of the voce infantile for everything can limit expression. Consider the second and third acts of Dal Monte’s Butterfly, where the voce infantile becomes less appropriate as the tragedy deepens. Whether or not Dal Monte continued to sing with it out of interpretive choice is unclear.

Gigli used contrast of tone color and dynamics more than any other 20th-century singer. Such 19th-century holdovers as tenor Fernando De Lucia varied dynamics and tone color as well as rhythm and, sometimes, notes. Most singers since at best have had or have created one sonority of individual character, at one dynamic level. Caruso and those who followed him mostly sang at full voice. Pavarotti and company do little varying of dynamics and seldom shade their tones, using the same color to express both happiness and sadness. Gigli had many sonorities and two basic dynamic levels, loud and soft. His art was based on chiaroscuro–the contrasting of tone colors, usually in response to words, and of soft passages with loud. He often covered and uncovered his voice, sometimes on a single note.

For examples of closed and open sounds in speech, consider French, where there are two “ah” sounds: the “ah” in “jamais” is closed, that in ‘théâtre” open. Covering involves darkening the tone and modifying vowels almost as if some were schwas, like the “uh” sounds in “America.”

As an interpreter Gigli reached back beyond Caruso, to Giovanni Battista Rubini, who, a century before Gigli, alternated loud passages with soft. (See my “Last of a Breed: Giovanni Battista Rubini Ruled as the Paragon of Virtuoso Tenors, King of the High F’s” (Opera News, February 13, 1982, reprinted in The Origins of Modern Tenor Singing (linked below).) But Rubini did not cover or sing open. To achieve chiaroscuro he contrasted full voice with mezza voce. Caruso used little chiaroscuro, whereas Gigli relied on it to create and sustain interest.

Let’s examine his use of chiaroscuro in the Butterfly love duet. He does little varying of dynamics and does not sing in mezza voce, even where one imagines he might have, such as in the passage “Bimba, bimba non piangere.” Instead he relies on alternating closed, open and covered singing to achieve chiaroscuro. (To follow my notations, please read the annotated libretto as you listen to the sample. Or better still, purchase the download to hear Gigli’s chiaroscuros more clearly than on our streaming sample.) 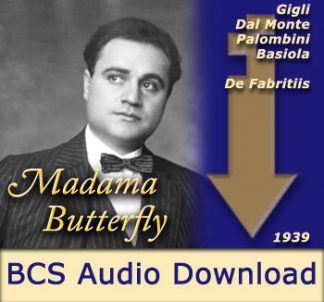