“When you sing, you have to feel what you are saying…. I actually cried on stage. Once in a while a note would issue forth that was not orthodox. That’s why the American critics don’t like me. But I don’t care. They want a music with water and soap.”
—Opera Fanatic: Stefan and the Divas (linked below)

Born October 10, 1924, near Istanbul to a Polish Catholic mother and a wealthy Turkish Moslem father, Leyla Gencer received a classical European-style education. Her mother pulled her out of a lyceum at 16 because she had fallen in love with a 34-year-old Polish architect with whom she read Plato. Her mother enrolled her in a conservatory. Initially her range extended to F above high C, but a French voice teacher soon shortened it to the A below. She entered a vocal competition in Holland without success and, in 1946, married a banker. She was temperamental and difficult, but he loved her. She left the conservatory to study with Giannina Arangi Lombardi, meanwhile singing in the chorus of the Turkish State Theater.

Her opera debut was in Ankara, as Santuzza, in 1950. Arangi Lombardi promised to launch Gencer’s career in Italy but died in 1951. Still in Turkey, she took lessons from Apollo Granforte and was accompanied by Alfred Cortot. She gave a recital, was noticed by the government and began singing at official functions, such as receptions for Eisenhower, Tito and Adenauer. Wrapped around her little finger were the President of Turkey and other high government officials. They interceded on several occasions so that her Turkish commitments wouldn’t interfere with her foreign offers. She had a much publicized affair with American Ambassador George McGhee. Her Italian debut came about on short notice—Santuzza with the San Carlo’s 1953 summer season. From 1957, she appeared at La Scala, including in the world premieres of I dialoghi delle Carmelitane (Poulenc) and L’assassino nella cattedrale (Pizzetti).

In the 50s she sometimes had a mediocre breath span, inadequate breath support and a tendency to flat. Her middle voice didn’t really sound fresh. But she could be tender, plaintive and full of yearning. And she had ravishing high pianissimos, such as the C in “O patria mia,” and excellent coloratura. Her sound could be dark, almost husky, for heavy roles and limpid and lyric for light ones. As Lucia, in general she adopted a bright sound, reserving a darker quality for such moments as “il fantasma.”

Although it is not unusual for substantial voices to have good agility in general, I can think of few examples of their having good staccatos. (Sutherland, for instance, sometimes avoided singing them or sang them slowly.) Thus I was astonished on hearing Gencer emit the staccatos of a soprano leggero in “Regnava nel silenzio.”

In a 1957 film of Trovatore (BCS Video #5), she often sings with fragility and otherworldly inwardness. She supplicates beautifully, exhorts with wonderful urgency and conveys the pathos of the death scene more affectingly than any other Leonora on video or CD.

As both actress and musician her timing is exquisite. She adds some crescendo to impel phrases toward their most dissonant points, their harmonic climaxes. When there’s a tied note she supplies a pinch of crescendo at the tie so that you feel the pulse. (This last touch, not uncommon with instrumentalists, is rare with opera singers.) She has a good trill, also lovely fioritura, particularly in descending passages. Her voice has smalto (bloom, sheen, enamel)–which it lost ten years later.

In Italy, foreigners usually were engaged only for works that couldn’t be well cast with Italians. In 1957 the country was not suffering from a dearth of Leonoras. Perhaps Italy cast Gencer in Verdi because she knew how to valorizzare la parola (to give value to the word), to make every syllable count.

Her 72-role repertory included operas by Prokofiev and Mozart (also concert works and songs), but she is best known for Donizetti, Bellini and Verdi.

She didn’t have chest resonance by nature but developed it for interpretive purposes. A literalist, she rarely embellished the Donizetti scores in which she came to specialize.

In Roberto Devereux (1964) she sang with a thrilling white-hot emotional intensity and used chest resonance amply. At moments her sound was spread in pitch a bit. But she packed such a wallop and sang with such sizzle that the recording is one of the handful of memorable opera recordings since W.W.II.

In a 1966 Aïda (BCS Video #610A), Gencer’s performance is distinguished by the vigor of her rhythm, created by a feeling for precise rhythm relationships, also by swiftness of attack. As with many other singers, her consonants are positioned just before the beat and her vowels begin right on the beat. Other singers’ consonants, however, take up more time. Notice how quickly her notes reach peak volume. This quick rise time enables her to minimize loss of volume of short notes and make a great deal out of, say, the 16th note in an emphatic passage with a dotted eighth and a 16th.

Aside from the occasional scoop, her intonation is better than most singers’. Her scale is even in power without the weakness low in the staff, around G and A, characteristic of most sopranos. Her chest voice is strong. She has good control over dynamics, including a pianissimo. Her vocal personality often is fierce.

A huge number of her live performances have been issued on LP and CD. 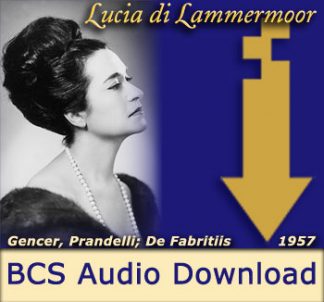