Downloadable .M4A or .MP3 files. Total size: approx. 185MB.
or Webcast: $6.95
Downloads are not eligible items in connection with our 6-for-5 offer.

Of L’amico Fritz Gigli stated in his Memoirs:

‘L’Amico Fritz’, in which I made my début–with Licia Albanese as Suzel and Vincenzo Bellezza conducting–on December 23rd, 1937, was to become my favorite Mascagni opera. Mascagni wrote it in 1891, as a kind of protest against the critics who had hinted that half the success of his first work, ‘Cavalleria Rusticana’, was due to the magnificently dramatic story by Verga which had supplied the libretto. For his second opera he was determined to find a modest, undemanding plot that would provide an unobtrusive background for the music, and no more. He explained this one day, in the train between Naples and Cerignola, to the music publisher Sonzogno. ‘Here,’ said Sonzogno, taking a booklet out of his pocket, ‘have a look at this.’ It was a sentimental farce called ‘L’Amico Fritz’. Mascagni read it once and declared with enthusiasm that it was exactly what he needed.

With one-dimensional characters and an almost non-existent plot, ‘L’Amico Fritz’ was undoubtedly a contrast to the powerful drama of ‘Cavalleria’. It belongs rather to the genre of idyllic comedies such as ‘L’Elisir d’Amore’ and ‘Don Pasquale’. The music is an unbroken flow of melody; I found it perfectly suited to my voice. [Memoirs, p. 197]

The performance we are presenting took place February 7, 1951.

Gigli said in his Memoirs,

On February 9th I collapsed while singing in ‘L’Amico Fritz’ at the San Carlo. I had tried to carry on in spite of a sudden attack of almost paralysing pain, but in the end I fainted. I was rushed to hospital for an operation, which proved successful; but I was not allowed to move for six weeks. [Memoirs, p. 221]

Stefan Zucker: Were there repercussions?

RG: Yes, after he left the clinic things got worse. They were depressed–and furious. My mother fought him over everything.

SZ: How did your father react?

RG: My father already was resentful because our house was crowded by my mother’s family, so he no longer felt at home. He fled to the other woman, who received him with affection and gave him the attention he needed…

In his first of three books, Confidenze (1942), Gigli declared:

A sick singer is a nonsensical idea, as much as a blind painter or a prize fighter with no arms. In other forms of art there can be examples of coexistence between infermity and genius; that of the deaf Beethoven suffices. But the fact is that in singing any form of sickness or physical or physiological diminution of one’s instrument, which is the most complex and the most complete, the most sublime and the strongest, corresponds fatally to the cessation of every artistic possibility….For singers the most minimal psychological or physical change is enough to cause fearful repercussions and incalculable consequences. That which for every other mortal is nothing or a simple and banal cold, for us becomes a big deal….That is why singers are so obsessed with their health; so obsessed that sometimes they even seem ridiculous…. Thus I made it a rule to have regular and adequate gymnastic Swedish exercise, practice rowing and target shooting assiduously and am an impassioned hunter and player of bocce. I even took fighting [wrestling] lessons from Renato Gardini, who was the Italian champion. I prefer activities that put in motion my entire organism.

All this once caused me to be whistled at for the only time in my life: I was in Recanati where I gave a magnificent silver cup to the victor of a footrace in my name. I was so excited that I challenged the mayor and another friend to a 100-meter run. They didn’t want to do it, but their pride was wounded by my insistence, to the point that they accepted, amid the enthusiasm of the public. The three of us crossed the finish line together, but I was dissatisfied and asked for a rematch: they left me behind and the public whistled at me in chorus–the first whistles of my life. Confidenze, page 155ff.]

Yet he suffered from catarrh. In the Memoirs he states, “Many singers, of whom I am one, seem to wake up with a kind of catarrh, which produces hoarseness for several hours until it all has been got rid of.” Did he have sinusitis? He did have hemorrhoids and diabetes.

During the second half of Gigli’s life his principal doctor was Mussolini’s physician, Cesare Frugoni, who later married Giulietta Simionato. Frugoni inferred that in 1918 Gigli had myocarditis.

Despite all this, somehow his health problems didn’t show in his voice. In this Fritz an occasional note is a little unsteady. 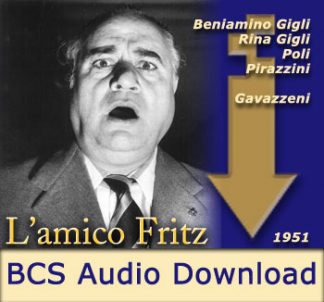