Downloadable .M4A or .MP3 files (total size: approx. 220MB).
Webcast FREE for a limited time. Log in to your account and click on the “Webcasts” link, or add to your cart.

Composed in 1876, 14 years before the first verismo opera, Cavalleria rusticana, today La Gioconda is performed explosively, in what we have come to think of as the verismo manner. By today’s standards this Gioconda is performed in a backward-looking style, with proportion, contrast, balance and legato emphasized more than words–an approach one might associate with Aïda (1871). The singers italicize words less than, say, Callas and don’t exaggerate diction. All have ease of emission; none sounds effortful or muscular. For them the unit of expression is the phrase rather than the note. They don’t sacrifice intonation for emotional effect. The result is less exciting than the Tebaldi-Corelli Gioconda  but less episodic and more coherent musically.

Giannina Arangi Lombardi (1891-1951) was queen of La Scala in the late 20s (together with Giuseppina Cobelli), and in addition to Gioconda got to record Mefistofele, Cavalleria rusticana and Aïda. Her voice is dark, not darkened. It’s haunting. She sings with closed tones exclusively, never covering or opening her sound. She employs chest resonance sparingly. Her interpretation would seem more fiery if she did use it more extensively and more heavliy. (Anita Cerquetti, who was opposed to singing with chest resonance, used it for this role; see the interview with her in the booklet to Opera Fanatic: Stefan and the Divas.) Arangi Lombardi’s middle voice is a little weak. Her sound blooms toward the top of the staff. Her high C is radiant. Her coloratura is excellent, and so is her breath span. Even more than Ebe Stignani, she sings with less portamento than most others then. One does not associate great control over dynamics with women of the era, but Arangi Lombardi is comfortable at any volume level, from fortissimo to pianissimo. And what about that B-flat, on “Enzo adorato! Ah! come io t’amo!” in Act I (disc 1, track 7)? She starts it flat and then overcorrects it as she swells it. Her best emotion is pathos. Her legato approaches the perfection of a virtuoso instrumentalist’s, the consonants not getting in the way. Her vocalism perhaps is more finished than any Italian woman’s since.

Arangi Lombardi began her career as a mezzo-soprano and sang Laura any number of times. The Laura on this recording, Stignani, flirted with soprano repertory. Here she sounds more soprano-like than in her recordings of Amneris, which came later. Each singer is a falcon (a soprano – mezzo hybrid). Arangi Lombardi and Stignani often sound similar. As a result there is insufficient contrast between the two parts. Stignani’s other characteristics are those mentioned in connection with her Aïda and Carmen recordings, except that, although she is short winded and her pitch is a little droopy, she sounds fresher here and doesn’t change “AH into “EH,” for the sake of vocal convenience. The next three singers have pronounced fast vibratos, which go poorly with Arangi Lombardi’s and Stignani’s more or less straight tones.

Camilla Rota, the Cieca, has a vibrato so prominent that many today will be taken aback. Yet she oozes soul and mystery, maybe in part on account of it.

In the wake of Del Monaco and Corelli we associate a heavier voice with Enzo than Alessandro Granda’s. He sounds like a less covered, lighter-voiced Aureliano Pertile, slightly nasal, with a similar vibrato but better intonation. Pertile’s singing was more personal and individual. Still, Granda’s abounds in nice touches in lyrical passages, an inflection here, a caress of a word there. Perhaps more than any other tenor he shapes “Cielo e mar” into beautiful phrases. Like, say. Flaviano Labò, he is a polished, musicianly singer who isn’t exciting. Much the same could be said of Gaetano Viviani, the Barnaba. He too covers less than later singers in this repertoire.

The one disappointment is Corrado Zambelli. Like the others, he also uses mask placement. But his is still more forward. The sound is nasal and hollow. He lacks the temperament to bring Alvise to life, and “Invan tu piangi,” in Act III, remains earthbound. But the role isn’t large.

Cavaliere Lorenzo Molajoli’s overall tempos are brisk in the Toscanini mode and sometimes faster than what we expect now. Yet the music breathes beautifully and is leavened with the occasional Romantic accelerando and ritard, in Act III, in particular. The chorus and orchestra nearly always are outstanding. Perhaps the key to the recording’s success is that everything is well rehearsed. In any case there seem to have been many more recording sessions than usual.
—Stefan Zucker

From an Interview With Magda Olivero by Stefan Zucker,
transcribed from the outtakes to the film
Opera Fanatic: Stefan and the Divas

Magda Olivero: When we speak of Arangi Lombardi, we’re going back to the era of singers with truly phenomenal techniques. I fell in love with those notes begun piano, swelled and then diminished. I listened to her recording of the first act of Gioconda, where, in “Enzo adorato,” she does exactly that with the B-flat. That same day I ran to my maestro [Luigi Gerussi] for my lesson and said, “Maestro, I heard the most wonderful record of Arangi Lombardi singing “Enzo adorato,” with that B-flat.” “It’s the last thing you’re going to learn,” he replied, “because it’s the most difficult.” In fact, it is the most difficult thing. But with my love, my passion to be able to sing those B-flats, with crescendos and diminuendos, those beautiful sounds that I loved so much–I succeeded. 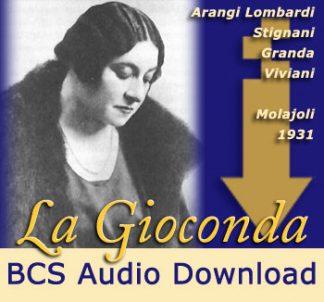