Downloadable .M4A or .MP3 files. Total size: approx. 220MB.
Downloads are not eligible items in connection with our 6-for-5 offer.

I hesitate to offer you just a sample because Gavazzi’s singing is representative of a different kind of sonority than one hears today. Unlike post-war sopranos, she doesn’t round or darken her sound. To ears unaccustomed to her approach she may seem screechy on first hearing. But unrounded, undarkened sound more readily conveys personality and passion. (If a sound naturally is dark, in the manner of Frazzoni’s, that is another matter.)

I believe that once you’ve accustomed yourself to her tonal palette you’ll find her moving. Forgive me for preaching, but if you listen to the sample and find her sound off putting, buy the download anyway. Her singing provides a rewarding time warp and may broaden your horizons. Vasco Campagnano and Ugo Savarese both are wonderful.

Stefan Zucker: Cerquetti, Adami Corradetti, Barbieri, Simionato, Pobbe and Olivero are all opposed to the use of chest resonance.

Carla Gavazzi: Chest resonance is indispensable. They are ignorant! They don’t know anything! Olivero used a lot of chest voice. Did she ever, in order to become successful. Even to a vulgar degree!

The above is from Opera Fanatic.

Gavazzi was born in 1913, in Bergamo, to a prosperous, artistic and educated family. She was sent to boarding schools in Switzerland and France, where she studied violin as well as French and German. She debuted, as Mimì, in 1940. Her career, interrupted by war, marriage and the birth of a son, resumed in 1946. Her repertoire included modern and chamber music as well as Semiramide, Pamina in Flauto magico, Faust, Liù in Turandot, Margherita in Mefistofele, Manon, Manon Lescaut, Otello, Micaëla in Carmen, Margherita da Cortona (Refice), L’incantesimo (Montemezzi), La favola del figlio cambiato (Malipiero), Mathis der Maler, La campana sommersa (Respighi), Cyrano de Bergerac and Risurrezione (both by Alfano). Alfano chose her for the world premiere of his song cycle based on the poetry of Tagore. Gavazzi sang at Florence, Milan, Parma, Brescia, Trieste, Bologna, Verona, Rome, Naples, Palermo, Barcelona and Lisbon. She recorded Elvira in Giovanni, Adriana, Fanciulla and Pagliacci and filmed Cavalleria.

She retired around 1960 because of a goiter, which caused intermittent swelling in the neck, and because her son had polio.

Gavazzi often was aflame with passion. At moments her Adriana recording gives spinal chills. I’m an Oliveroite, but I have to admit that I sometimes find Gavazzi’s more rhythmic approach preferable because it enabled her to move a phrase ahead better. Her Adriana surpassed Olivero’s at aggressive, assertive moments. (Olivero’s Adriana had other, spiritual dimensions, also a rapt, girlish quality.) Sometimes Gavazzi sang with a flicker vibrato. At her best her intonation was uncommonly accurate. For example, unlike most singers, she sang half steps untempered (as a violinist would play them). She lacked a pianissimo.

CG: I find that in general there is too much preoccupation today with making a rotund sound. All the singers are good and they are all the same, with beautiful pianos, which were much less common before. If Katia Ricciarelli hadn’t sung so many pianos, she still would be singing with that lovely voice she started with. 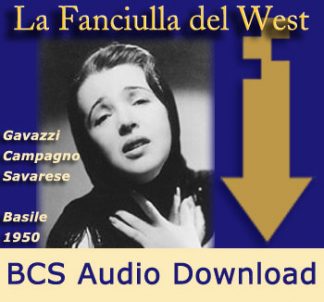