The Most Touching Bohème

In college I roomed for a time with Jordan, who loathed opera. One day, somehow, I got him to listen to the death scene from this Bohème. He played it over and over again–and was ruined for life. If you want to opera-fanaticize someone, this recording will do as well as any.

Gigli is in uno stato di grazia–a state of grace–the voice luminous. This is the most personal and intimate, the warmest and most richly human of his complete opera recordings–a Rodolfo for the ages. He sings the first two acts with a chuckle frequently in the tone. Sometimes the chuckle merely is playful. At others it is tinged with irony. He takes the climax of “Che gelida manina” with the syllables distributed as written, “la-a spe-e-ranza” (instead of “la-a-a-a speranza,” which is what he does in his 1931 recording of the aria and in the 1936 film Ave Maria; he was an “AH” tenor rather than an “IH – EH” tenor). He’s a little flat on the C but makes up for it with a stunning “Amor! amor! amor!” in the duet. He covers for reasons of technique, not interpretation. Most of the time he sings closed. Unlike in his Butterfly recording he’s not compiling effects. (He sings “mano alle dame,” in Act IV, in mezza voce, not falsetto.)

Albanese’s tone borders on the voce infantile, without being as bright and girlish. (For discussion of the voce infantile, also of singing closed, open and covered, see Butterfly) She came along a few years before rounding and darkening the tone became ubiquitous. (What would happen if her younger self entered her own singing contest? Would the judges understand?) Her best qualities: a pathos, a plaintiveness that make me teary eyed, also clear diction. She feels every word. Consider the urgency in her tone at the opening of Act III. Consider the heartbreak as she pleads with Marcello to help her. She has plenty of faults: Sometimes her pitch sags slightly (a tendency that was to become more pronounced later in her career). Far from sounding virginal like Cesira Ferrani, the first Mimì, at 24 Albanese’s voice doesn’t sound fresh. She lacks Olivero’s variety of color. Her low middle sounds unhealthy, weak, a little breathy. And the last tone of a phrase often doesn’t fade but ends with a hard offset (a kind of grunt). (The problems with her low middle and the ends of phrases are more in evidence on other recordings.) Never mind. Thanks at least as much to her as to Gigli, this 70-year-old recording remains the most touching Bohème, one of the handful of inspired studio recordings. If you listen to it a few times passages will re-play themselves over and over again in your mind.

The Scala orchestra under Berrettoni’s intuitive leadership is more proficient than the Rome Opera orchestra heard on many Gigli sets. 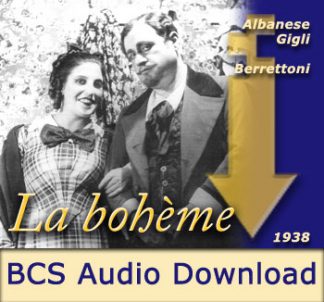