Downloadable files: M4A or MP3 Format. Total size: approx. 280MB.
Downloads are not eligible items in connection with our 6-for-5 offer.

Conversations with Zeani, Gencer and Frazzoni by Stefan Zucker
–also Corelli and Gobbi on Pederzini plus Mussolini Wiretaps Her

Poulenc had written Blanche for Denise Duval. But the world premiere was to be at La Scala, and she couldn’t sing it in Italian. He had seen my Violetta in Paris and wanted my voice and personality for the role. I had made my Scala debut as Cleopatra in Giulio Cesare, already having sung at the Verona Arena and in Naples and Rome–as well as in the Italian provinces, where the public knew the operas by heart. I had started in 1948. La Scala had offered me Violetta in ’52, but I had been engaged by Cairo, so I had to decline. La Scala was upset with me because of that.

The period of the Dialoghi premiere was wonderful for me. Poulenc wrote in a very interesting way, using the voice almost as in speech.The music gives me big emotions. (Later I perfomed his Voix humaine, in Italian, many times.) I adored Pederzini, a great singer and artist, and was happy to have Frazzoni and Gencer around me. Poulenc was like a father to us. The Scala ambience was ideal. The public was well prepared.

I was 31 and in love with my future husband, Nicola Rossi Lemeni [1920-1991]. He was engaged at La Scala, and during the period of I Dialoghi I got to know him better. I even dared to have his child. There have been other outstanding bass voices, but Nicola was the most important singing actor after Chaliapin.

I sang 71 roles and am happy that 40 of them are on pirate records. [Most are out of print.] But the most important thing that happened to me was the Carmelitane premiere. For me it is like yesterday.

I sang because I loved to sing and sing well.

Virginia Zeani and Nicola Rossi Lemeni appeared on “Opera Fanatic” twice, in 1986. The above interview was on June 19, 2007. 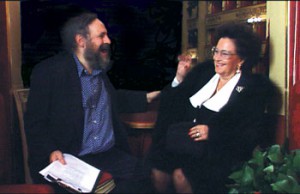 Leyla and Stefan at La Scala. “She wanted to cut my beard!”

Leyla Gencer Interviewed by Stefan Zucker, Part 4,
transcribed from the outtakes to the film
Opera Fanatic: Stefan and the Divas

Stefan: What were the most difficult moments of your career?

Leyla Gencer: There were lots of them that were more than difficult.

LG: Well, the first time I sang at La Scala, in I dialoghi delle Carmelitane. I had auditioned for Maestro Victor de Sabata, singing “O cieli azzurri,” with the C pianissimo. He was enchanted and signed me up right away. He said, “You’ll sing Aïda. Unfortunately he fell ill that year. A new artistic director arrived, and you know that when the staff changes, everything changes. In any case, the new artistic director didn’t think it wise to give a little-known, relatively inexperienced young singer the leading role in an opera di repertorio, so he offered me Madame Lidoine. I wasn’t happy about the change, but I accepted. It was La Scala, after all, and I was resolved to sing there at all costs. When I had begun my career I had said to myself, “Either I’ll sing at La Scala or I won’t sing at all.”

LG: Because this was my ambition. I was very ambitious. Either I’ll have a great career or none.

Then, during rehearsals, the director, Margherita Wallmann, didn’t like my performance. She said I was too aristocratic–La Sultana–that the character was a warm, motherly woman of the people, not a princess. But that’s the way she had directed me, and that’s the way I played it. Well, she complained about me. I was called into the head office, where they said, “The composer and the director say you are not suited to the part.” I went back to my hotel and cried. I telephoned my friend in San Francisco, Kurt Adler, and said, “At La Scala they say I’m not suited to Mère Lidoine.” Adler, who was a musician, said, “What do they mean, you’re not suited? You’re perfect for the part. You have a contract; they have to honor it. Say to them, ‘I want to audition in front of you and have you show me why I’m not suited.'” I telephoned the directors of La Scala and said, “I want to have an audition, with orchestra, in front of the entire staff, to see if they think I’m suited or not.” Two days previously Francis Poulenc had attended a recital I’d given for RAI and told me afterwards, “You were wonderful. You are perfect for my Mère Lidoine.” Then, two days later, he and Wallmann complained I was not suited to the role. That’s the theater for you. These are the bitter moments.

I called Poulenc again and said, “Maestro, come and accompany me at the piano and tell me what you want–how you want the part sung.” He came and said, “No, I didn’t say that, I didn’t mean….”etc. He played the part from beginning to end, accompanying me. I said, “Was that alright?” He replied, “Yes, it was.” The audition was before the entire staff of La Scala, sovrintendente Antonio Ghiringhelli, artistic director Francesco Siciliani, Wallmann, etc.–on this very stage. [Gencer had said she only would do the interview at La Scala. We were seated in a box.] The orchestra was directed by Nino Sanzogno, who had been very good to me and who had faith in me. I sang well. Ghiringhelli said to Wallmann, “I’m sorry, ma questa è molto brava–she is excellent.” If you don’t want to direct, you don’t have to.” And she [Gencer, in a high, whiny voice], “I didn’t know…. I didn’t think….. She was playing the Turkish princess….”

It went very well. I made my Scala debut as Lidoine. But I shed many tears over this incident.

SZ: Have you ever acted the Turkish princess offstage?

SZ: Not even in New Jersey?

LG: I behaved like a Turkish princess in New Jersey?

SZ: According to Jerome Hines.

LG: Hines is a special case. He was acting like a barbarian.

LG: Because he was singing Attila.

SZ: He says you commandeered his dressing room.

SZ: He discussed the episode with me on the radio [see below].

LG: He had a beard like yours. Why do you have such a long beard?

LG: All those curls there–it makes you look old. All the way around. The mustache too–a bit smaller. You would look younger. You aren’t old. You’re young!

Pederzini, Zeani, Gencer and I were in the world premiere of Dialoghi delle Carmelitane, at La Scala. Because of the large cast, we singers had to share dressing rooms, with one exception–the star. Zeani and I took a dressing room together and left the one for the star to Pederzini. But Gencer grabbed it although she certainly was no more important than we were. Perhaps at that moment we were singing better than Pederzini, but she was a legend with a great career behind her, returning to La Scala after an absence of many years. We young singers could not have imagined we’d be in the same cast with her–an honor. The star’s dressing room plainly should have gone to her, but Gencer refused to give it up.

Later she got to sing all those Donizetti and other revivals because she was [conductor Gianandrea] Gavazzeni’s mistress.

Corelli and Hines on Gencer

Franco Corelli: I sang four performances of Poliuto with Gencer, when she finished the run, taking over from Callas. She was beautiful to work with, sweet and polite.

Jerome Hines: I worked with Gencer at the tail end of her career, and she was not quite so gentle and sweet. I don’t think she intended to be gentle and sweet. She had her dresser running out the door in hysterics–crying. When she walked into the theater she decided she wanted my dressing room instead of hers, and I was bumped out even though we were doing Attila–and I had the title role. The stage director told her, “Now please, don’t stand there after the end of the aria and pose 30 seconds, waiting for applause. You must go off.” She agreed but when the time came did as she darn pleased. For the ballroom scene I wanted to come in with a cheetah on a chain and arranged for the opera company to rent one. They are gentle, more or less, and more tamable than other leopards. But came the dress rehearsal and they told me the cheetah had caught cold (I think they just were chickening out). I entered the ballroom scene and sat down next to Gencer. She said, “Where’s the cheetah?” I said, “The cheetah caught cold and when they get sick they get nasty.” She smiled and said, “Just like me!” [Laughs] From that remark I took it that we were witnessing her usual behavior.

FC: Where did this happen?

JH: At Symphony Hall, in Newark.

FC: When Italians come to America they always try to be temperamental.

FC: Americans believe Italians are temperamental, so Italians try to put on a show, not only onstage.

(The Corelli/Hines exchange was excerpted from the “Opera Fanatic” radio show of March 3, 1990.)

For Corelli and Gobbi on Pederzini, also for a transcript of a conversation between Pederzini and her Fascist-bigshot lover, click here.

(Dialogues of the Carmelites)

Recording of the world premiere performance
Opera in three acts, based on the screenplay by Georges Bernanos 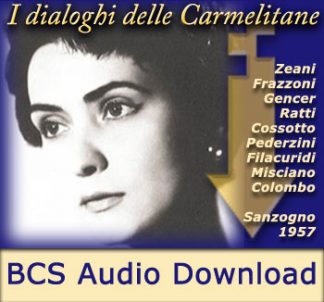 You're viewing: I dialoghi delle Carmelitane From: $0.00
Select options