Listen to sample one:

A Recording of a Fabulous Gigli Concert

In this 1951 recording of a concert from Rio, in surprisingly good sound, Gigli fondles the audience with his mezza voce and whips it into a frenzy with his emotional outbursts. Feeding off his own intensity, he is like a lover whose passion is a catalyst for his deeper feelings. The result is a thrilling, moving experience. With some exceptions his intonation is good. When he does go off pitch, it usually is on account of passionate emphasis, as in the recitative to the Luisa Miller aria. His pitch seldom droops because of lack of support, the way it does on a number of his earlier recordings. Among his shortcomings, however, is short breath span. If he had more to work with, he might have drawn out certain phrases a little more. Another is that his high notes are cut short. The B-flats frequently don’t last the written value of the note, let alone the duration that one would expect from a leading Italian tenor.

He begins with “O del mio dolce ardor,” his voice more beautiful than in his 1935 studio recording. The theater’s resonant acoustic is a help. He sings caressingly if without delving beneath the surface. His objective seemingly is for the audience to savor his mezza voce.

In “Quando le sere al placido” he is off pitch in the recitative–very sharp when he is emphatic. But he sings with great fire. In the aria he oozes sadness most movingly without being maudlin. His top notes ring. Only Giuseppe Anselmi’s version is in this class.

Next is “De’ miei bollenti spiriti,” in which his covering is less obvious than in his 1928 studio recording. He opens slightly on occasion. There is no sobbing.

He feels the words and music of “Oh tu che in seno agli angeli” so much more than on his 1941 studio recording. He’s a little more shortwinded, however. His legato is great.

In “E lucevan le stelle” he sings “disciogliea dai veli” in the conventional, less musical way, with the fermata on the A, on “-scio,” rather than on the G of “-gliea.” He sings “E muoio disperato” open at the end. After the second high A he shouts, abandoning the notes. He does an encore of the aria. There is no big difference between the versions except that he sings more of the notes at the end.

In “Vesti la giubba” he has a wonderful laugh and sings with great variety of inflection and fabulous passion and slancio. Here of course he does sob. In opera too much understatement can be in bad taste. I’m not suggesting that one couldn’t sing “Vesti la giubba” effectively without sobbing, but sobbing can be communicative.

In “Mi par d’udir ancora,” transposed down a whole step, his voice is very warm.

In “Ah! non mi ridestar” the A-sharps are cut short. By this point Gigli’s emotional energy begins to flag.

In “M’appari” he cuts short the B-flat.

In “Quando nascesti tu” (Gomes’s Lo schiavo) the recitative strays from pitch. But he sings with abandon and holds the B-flat at the end for a suitably long time.

By the Bach-Gounod “Ave Maria” he is tiring, and his voice is sounding old.

The recording of the concert concludes with “Mattinata,” in which he’s shortwinded. 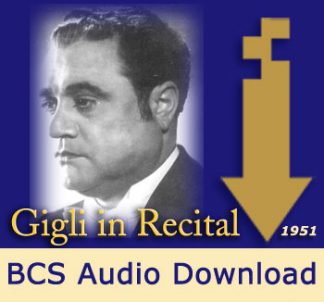 You're viewing: Gigli in Recital From: $4.95
Select options