Galliano Masini had a ravishing tenor voice. His most beautiful records are “E la solita storia” from Cilea’s L’Arlesiana, from 1932, and “Se Franz dicesse il vero…. Ah! Ritrovarla” from Mascagni’s Lodoletta, also from 1932. By 1941, when he recorded “O tu che in seno agli angeli,” his voice had coarsened. (The recording is not from the complete set of Forza.)

In “Cielo e mar,” also recorded in 1941, the bloom is gone yet the singing is still impressive. In “Addio alla madre” (1941) he has insufficient pathos. His Chénier (1941) excerpts are missing in poetry. He heavily covers “Recondita armonia” (1947). The tone has no sheen.

Notice his treatment of the high A on “discogliea dai veli,” from “E lucevan le stelle,” recorded in 1947. According to soprano Gilda Dalla Rizza, this is the way Puccini intended that it be sung. (I quote her at length on the matter in my forthcoming book Franco Corelli and a Revolution in Singing.)

Masini is flat in “Mia madre, la mia vecchia madre” (1947), yet redeems himself by being touching in “Vedi, io piango” (1947). When Kiri Te Kanawa flats, I cannot pardon her. But when an expressive singer, Callas or Olivero, say, is out of tune, I forgive her. Such is an opera fanatic’s duty.

The ends of many of Masini’s phrases are emotionally empty, as if his attention has wandered. This tends to happen before breaths.

Masini’s mezza voce sometimes is redolent of pathos. At its best his top is brilliant, and he has a good breath span.

In our interviews Jerome Hines maintained that squillo comes from the larynx. He and Franco Corelli were of the view that to have squillo you have to lower your larynx. Well, Masini’s singing is a counterexample; he places in the mask, yet his tones certainly do ring.

Masini palls on me because of the sameness of the personality from one selection to the next. Still, since he was one of the leading Italian tenors of the period (along with Del Monaco, Di Stefano, Gigli, Lauri Volpi, Martinelli, Merli, Pertile, Schipa and Tagliavini), one needs to be familiar with him.

Olivero told me the following about Masini:

Magda Olivero Interviewed by Stefan Zucker, Part 6,
transcribed from the outtakes of Opera Fanatic: Stefan and the Divas

Magda Olivero: Galliano Masini had the most beautiful voice of all tenors–a magnificent bronze sound. What a pity nature had not gifted him with a brain that corresponded to his voice! If he began a performance well, he would sing well throughout. But if he began with a cracked note, he would crack during the entire evening. In 1940 I sang some Adrianas with him at the Rome Opera. Offstage, he perhaps was the tenor who most resembled Maurizio, Conte di Sassonia–regal, elegant, gorgeous. I remember his costume, embroidered with pearls. He also had a magnificent head of black wavy hair and a handsome face. Too bad he was a little slow! 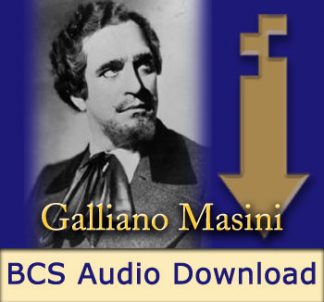