Corena.
Downloadable .M4A or .MP3 files. Total size: approx. 140MB.
Downloads are not eligible items in connection with our 6-for-5 offer.

The basso buffo tradition began in Naples in the early 18th century with the Casaccia family, who dominated buffo singing there for four generations, generally performing in dialect. Some members went in for broad comedy. Stendahl had this to say of Carlo Casaccia in connection with his appearance at the city’s Teatro dei Fiorentini in Pietro Carlo Guglielmi’s Paolo e Virginia, in 1817:

[T]he famous Casaccia . . . is enormous, a fact that gives him opportunity for considerable pleasant buffoonery. When seated, he undertakes to give himself an appearance of ease by crossing his legs; impossible; the effort that he goes through topples him onto his neighbor; a general collapse. This actor, commonly called Casacciello, is adored by the public; he has the nasal voice of a Capuchin. At this theater everyone sings through his nose.

During the 18th century two types of buffo emerged: the “buffo nobile,” or noble comic, and the “buffo caricato,” or exaggerated comic. The same singers who undertook “basso cantante” or non-comic lyric bass roles also frequently sang those for buffo nobile, for they are similar in vocal demands, which often require virtuosity. Buffo caricato parts, on the other hand, were a specialty, calling for falsetto singing in imitation of women and, above all, patter singing or chatter. Beauty of tone is of small consequence for a buffo caricato, mastery of comic effect essential. The part of Don Basilio in Il barbiere di Siviglia is for buffo nobile, that for Don Bartolo in the same opera for buffo caricato. The florid passages for Mustafà in L’Italiana in Algeri are not very different from those for Assur in Semiramide, and in fact both roles were written for Filippo Galli, who moved comfortably between the nobile and cantante genres. On the other hand Taddeo in L’Italiana is a patter part.

Fernando Corena had wonderful flair as a buffo caricato, his best role: Bartolo—at first grand and expansive, exuding self-importance and pomposity, then sputtering with outrage. He invariably stole the show. But when he crossed over into parts for basso cantante, such as Il conte Rodolfo, in La sonnambula, or those for buffo nobile, such as Mustafà, he sounded ungainly—labored in coloratura and spread in pitch. Still, his voice was truer than that of Salvatore Baccaloni, his immediate predecessor. Corena was able to swat out Mustafà’s Gs, beyond the range of many basses; however, particularly in later years he sounded effortful in the high tessitura of the L’elisir d’amore entrance aria, with its many Es. His voice retained substance no matter how quickly he chattered. And he was masterful at caricaturing women in falsetto, for example, at the interpolated words “sul tamburo” in Barbiere. In recordings of arias from Le Caïd and Philemon et Baucis, although he lacks the coloratura facility, impeccable legato and pinpoint accuracy of intonation of the legendary Pol Plançon, he sings with more personality, exuberance and variety of tonal inflection. Plançon dazzles, but Corena’s more fun.

On stage, Baccaloni, a comedian, was never out of character. He claimed to have prepared five ways to play each moment, once remarking, “I choose. Only a fool improvises.” Corena, a clown, often improvised—and frequently amused himself by playing pranks on other singers. He was better at expressing extroverted feelings than deep dark emotions. Portraying Falstaff as a clown, he failed to capture the character’s reflective side. As Leporello he was a delight in the “Catalogue” aria, somewhat of a disappointment toward the opera’s end. His Don Pasquale was a triumph—except in those passages calling for pathos. Above all, Corena excelled at detailing foibles and pomposity. He was pre-eminent in his repertoire from the mid-50s until the late 70s.

In the Mozart arias heard here Corena sometimes puts consonants rather than vowels on the beat, which causes him to be behind it. Some of Figaro’s music sounds a mite high for him, but he has no trouble with the Es in Dulcamara’s entrance aria. (The recording was made early in his career.) In the Gazza ladra aria he sings twice in parody falsetto. (For an essay on the difference between parody falsetto and head voice, see Il barbiere di Siviglia, linked below.) For the Gioconda scenes he adopts a more focused, biting tone that makes his voice almost unrecognizable–he sounds like a dramatic bass.

This article, written in 1991, is reprinted from The International Dictionary of Opera and The St. James Opera Encyclopedia, with additions and minor changes. 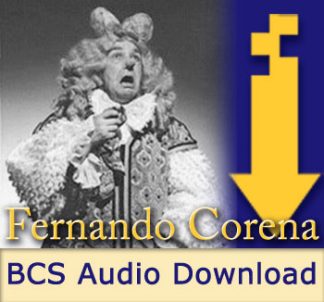