Downloads are not eligible items in connection with our 6-for-5 offer.
Questions about our audio downloads? Check here.

Now you can save when purchasing both of our Mascagni-conducted Cavallerias as a download set – see linked product!

To a greater or lesser degree Gigli’s interpretations at this time revolve around his use of open, closed and covered tones. discussed in detail in connection with his recorded Butterfly.

Somewhere I recall reading that Mascagni asked Gigli not to sing the “Siciliana” in elegant, covered tones. Gigli obliged. Ordinarily, for reasons of technique, he covered from F-sharp on up, but in the “Siciliana” he sings most notes, including some of the A-flats, open. In the “Brindisi” he even sings the high B somewhat open. Still, from the “Brindisi” onward he covers most notes but does so lightly. Had he sung the high A open in the phrase “Bada Santuzza schiavo non sono,” in the duet with Santuzza, it would have been more exciting. His breath span is longer than it usually is. For example, in the “Brindisi,” on its first occurence he sings the phrase “come il riso dell’amante; mite infonde il giubilo” without taking a breath.

In this recording Bechi is at his most exciting. As is typical of pre-war Italian sopranos, Bruna Rasa doesn’t round or darken her tones and indeed often sings rather open. She is the most compelling singer on the recording because of her pathos and fuoco sacro.
—Stefan Zucker

With his magical baton in his hand, Mascagni let himself fly on the wings of music, to a better world, where discs, clocks and commercial necessity didn’t exist; he laughed at technical needs….He put on a pair of new shoes that at his smallest movement went cri-cri, causing the session to come to a halt. The producer said to him, “Excuse me, Maestro, but you know that every outside noise gets recorded, and your shoes are creaking. So as not to ruin the recording, you need to try to stand still.”

“What, my shoes,” responded Mascagni. “The cri-cri isn’t good? That’s what you think! I’m adding it to the orchestra as a supplementary sound. We’re in the country, and in the country the sounds of crickets are a good thing.”…

When we recorded the duet with Bruna Rasa, we sang the first take really well, synchronised–fused with the orchestra–a masterpiece. When the last note finished we were waiting for the red light to go off, when Mascagni exclaimed, “Bravi, benissimo, I’m really happy”–and he clapped his hands like a child. We had to do it over again.

After we had repeated the thing a zillion times for musical reasons or because the wax of the matrix broke, we thought we finally had brought it into port when, with the red light still lit, Mascagni declared, “Obviously we’ve got it”–and everything was ruined. [Translated from Daniele Rubboli: Gino Bechi: il palcoscenico e la vita (Bologna: Bongiovanni Editore, 1988), p. 100ff.]

Click here to read interviews with Simionato and Olivero on Bruna Rasa.

1. Introductory speech by the composer:
Dear Ladies and Gentlemen: I am Pietro Mascagni, and I am here to say that my Cavalleria rusticana is now fifty years old and is linked in my memory to so many demonstrations of sympathy that I have not been able to resist the invitation of the noble Voce del Padrone, and I decided to present a recording of it complete and, for the first time, under my personal direction. My child, brought to life by the most celebrated singers, orchestra and chorus, which have no rival in the world, will remain for so many my image–better than any portrait I could sign. And I, who have signed so many autographs, have never given one with greater pleasure, for it is alive and it is that which represents me the best in the double role of composer and conductor of my music. I salute you cordially, before raising the baton.

Click here to read interviews with Simionato and Olivero on Mascagni and Bruna Rasa. 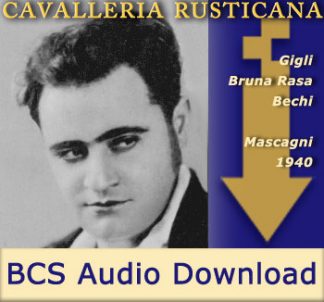