Franco Patanè wielded the Einstein of batons. In rehearsal he didn’t speak; his stick told the whole story. For this he was venerated by his players. Most successful musicians begin early, but Patanè took his first piano lesson at 18. He came to New York in the 60s to conduct at the New York City Opera. I coached repertory with him. He taught by demonstrating. I was frustrated because he used touches of rubato so subtle that mastering them eluded me. I got nowhere when I asked him to verbalize; everything he did was intuitive, based on feeling. To me he complained that the company only would pay him to come a week before opening night, that City Opera’s musical staff was worthless and that as a result he had to coach the singers day and night so that they could get through the performances. He also lamented the frequent changes of cast, ascribing them to corruption. I asked him if exhaustion was the reason that he sometimes conducted with his eyes closed. He said no, that it was because of the lights. In rehearsal he used much faster tempos than in performance. I gathered that he preferred the rehearsal tempos but in performance was accommodating. He once declared that “Giovanni Consiglio has the most beautiful tenor voice in America.” (I agreed. Moreover, no one since has rivalled him.) The closest conductor to Patanè in the past 40 years was his son Giuseppe Patanè, of whom he was proud. I did not know that he, the father, had conducted Gigli, and he never mentioned it. Born 1908, Franco Patanè died in an auto accident in Italy in 1968. I don’t claim that he always was a profound interpreter, merely that he was a supreme craftsman with regard to conducting an orchestra–and a warm-hearted human being.

In his Memoirs Gigli wrote:

I think it had been previously unheard-of for the same tenor to sing, on the same evening, in both [Cavalleria and Pagliacci]. [Helge Rosvaenge did the same thing.] Managers and impresarios were rather pleased with this innovation of mine. It saved them money, because I sang two operas for the price of one. [Memoirs, p. 215]…The older I got, the more I enjoyed astonishing audiences by my bravura in this double programme. It was, I confess, largely the desire to show off that made me choose it so often. [Memoirs, p. 222]

Gigli is perfervid throughout the performance and more involved with words than in the 1934 Pagliacci and 1940 Cavalleria recordings. His voice is heavier, and he plainly doesn’t feel the need to try to make it suit the music by darkening his tone, as he does in the 1934 Pagliacci. In the “Siciliana” he covers the high A-flats and some other notes. At times his voice is slightly unsteady–afterward the problem goes away. He is satisfyingly open toned on “Bada, Santuzza, schiavo non sono,” resigned to dying on “A piacer vostro” and affecting in “Addio alla madre.”

In “Un tal gioco” he tells a story. Rarely can the passage beginning “Cammina adagio,” before “Vesti la giubba,” have been as dramatic or exciting, thanks to Gigli’s slancio (oomph) and his open tones above the staff. In “Vesti la giubba” he makes the laugh after ” Bah! sei tu forse un uom?” increasingly bitter as it continues, and he pours bitterness into the arioso. In “Ridi, Pagliaccio, sul tuo amor infranto!” he opens the sound on “amor,” to telling effect. In response to the audience’s enthusiasm he repeats “Vesti la giubba.” At the end he cries out “Infamia!” twice. The first time he sings “In-” on D-sharp, “fa-” on F-sharp and “mia!” back on D-sharp–quickly releasing the pitch and partially speaking that syllable. The second time he sings “In-” on a high B natural, “fa-” on an open-toned high C-sharp, from which he exits with a portamento to a high B-natural, with “mia” remaining on the B-natural. The high C-sharp is among his best top notes. The ensuing applause is wild, tumultuous. From “Un uomo era con te!” his first words to Nedda in Act II, he makes you feel his pent up rage. In “No, pagliaccio non son” he is less choppy than in the 1942 film Ridi Pagliaccio–his accents are less forceful. By 1952 he had worked out how to sing high A and B not covered but closed. He opens the notes at will. He says “La commedia è finita!” simply, sounding spent.

Adelina Cambi is an impassioned and musicianly Santuzza who darkens and covers her voice. Piero Guelfi proves that it is not mandatory for a dramatic Italian baritone to cover his top notes. The Santuzza-Alfio duet is hair raising. Pina Malgarini is a girlish, bright-voiced Nedda, playful cuddly and adorable. She does not darken her voice; not every woman did yet. Giuseppe Gentile seemingly has a mammoth if occasionally unsteady voice that he fills with feeling. Saturno Meletti is an ardent Silvio who knows how to move the music ahead.

Like Mascagni, Patanè inflects tempos romantically. Yet he moves the music forward–even to the point of rushing “Voi lo sapete.”

In their frenzy the performers make some mistakes in timing. But I know of no more cathartic Cav/Pag–the Pag especially. Well, if there are counterexamples, they are the 1934 Martinelli Pagliacci and the 1955 Di Stefano Pagliacci. 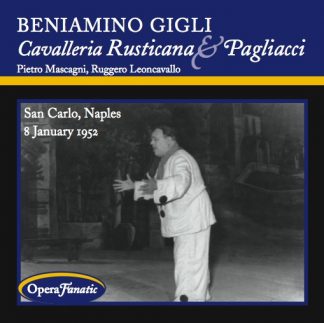