In their interviews for the film Opera Fanatic: Stefan and the Divas, Olivero and Simionato each comment on what they deem the slow tempos of Mascagni’s conducting. In his performances of Cavalleria rusticana at the Met, Leonard Bernstein, on grounds of historical fidelity, copied the notoriously slow tempos of the Mascagni-conducted studio recording of the opera. However, in the recording of a performance conducted by Mascagni on November 7, 1938, two years before the studio recording, running times are faster even though he slows down more often. In the live version tempos ebb and flow almost continuously, with gradations so subtle that you never feel a movement lacks a basic tempo. In many styles of music it is desirable to find one tempo that fits the movement, without requiring adjustment, but not here. Because of fewer tempo inflections, the studio recording has insufficient variety and contrast.

In both versions Mascagni observed the metronome marks in the score, but this tells only part of the story because there are relatively few of them. Mascagni inflected the tempos greatly. The difference between the recordings in part is the difference between the tempo inflections. In the live “Intermezzo,” in particular, Mascagni employs unwritten ritardandos and accelerandos, seemingly to emphasize harmonic relaxation and to heighten contrast. In the studio version he has many more ritardandos than accelerandos. In both versions the melodies sound more lyrical, more beautiful but at times less propulsive than under other conductors.

On the live recording the orchestra has wonderful dynamic range, playing very softly on occasion, and is exquisitely balanced so that melodically important notes are distinguished from harmonic filler, with the musicians treating not notes but phrases as units. The chorus, too, is more responsive to Mascagni on the live version.

Lina Bruna Rasa is in better voice on the live version. In the live recording, even more than in the studio version, she sings with great pathos. She is so moving that her Santuzza is among the outstanding examples of il fuoco sacro (the sacred fire)–what in Rossini’s day was called “singing felt in the soul.” In the live version, Antonio Melandri, sounding like a lighter-weight Italian Jon Vickers, sings an uncommonly feelingful and plaintive “Addio alla madre.”

Bernstein evidently was unaware of the existence of the live recording. One wonders what effect it would have had on his interpretation. 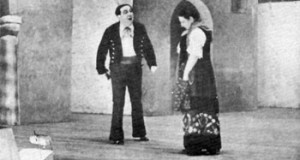 Melandri and Bruna Rasa as Turiddu and Santuzza

Lina Bruna Rasa (1907–84) opened the 1927 Scala season as Elena in Mefistofele, under Toscanini. That year she sang in the world premiere there of Wolf Ferrari’s Sly. Mascagni chose her for the world premiere of his Nerone at La Scala (1935), for a Cavalleria tour in Holland, Belgium and France (1937) and for his studio recording of Cavalleria (1940). (Simionato is the Mamma Lucia in the studio version.) In 1935, after the death of her mother, she became schizophrenic and in 1937 tried to throw herself into the orchestra pit during a performance. In 1940 she was institutionalized but was released occasionally to perform. She moved Toscanini to tears at a 1947 Milan concert. After an unsuccessful comeback in 1948 she was returned to the institution. —SZ

Click here to read interviews with Simionato and Olivero on Bruna Rasa. 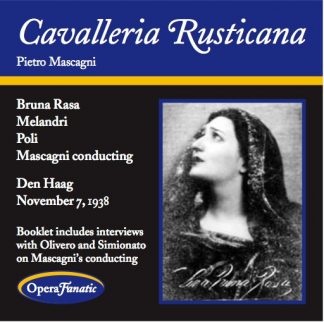