Please see this important information about our audio downloads.

Leyla Gencer Interviewed by Stefan Zucker, Part 2, transcribed from the outtakes to the film Opera Fanatic: Stefan and the Divas

Stefan Zucker: How did your interpretations compare to those of Italian singers?

Leyla Gencer: I had no tradition of opera, of singing, such as existed here in Europe, in Italy. Everything was new for me. When I studied, I remained very close to the score as written. I didn’t imitate anyone. I sang according to my own musical conception, according to my own musical understanding. My colleagues had grown up in the verismo era and believed you always had to sing forte. Perhaps because I hadn’t heard the others, I was untainted by any vestige of the infamous age of verismo.

SZ: Let’s suppose we are in the 1950s, and you are about to begin your career. What would you do differently?

LG: Nothing. Because that was a good period for me vocally and technically. I prefer that period to the second period of Gencer.

LG: Because the singing was of a really extraordinary purity. They didn’t like it. For example, when I sang pianissimo, my soprano colleagues said, “Why are you singing pianissimo?” “Because that’s what’s written.” “No, this is Trovatore; you have to sing forte.” Where it was written pianissimo, I sang pianissimo. And so they assumed I had a small voice. They had grown up in the verismo era and believed you always had to sing forte, whereas I had the type of voice that later would become fashionable. I think I was ahead of the times. But there is an explanation for this.

The return to the school of bel canto singing was not without its problems. There was an emphasis on loud singing, on exaggeration. I sang with delicacy and nuance–a style that in a few years everyone imitated.

Eventually, some of them even went too far. I won’t mention names, but there were singers who sang so softly you no longer could hear them. If you’re singing piano, the voice should maintain the same harmonics as when you’re singing forte. It mustn’t change colors. This way, even when you’re singing in a vast space like the Arena in Verona, if the harmonics are the same, even your soft singing will pass through the orchestra and go out into space. If you sing piano correctly, your voice can be heard even in the Arena of Verona. It’s possible for a pianissimo note to be heard more than a forte note; I know this from my own experience. And so you see, I was ahead of my time, singing as they did in the 19th century.

SZ: Did the voice change over the years?

LG: Of course, the voice changes naturally. The repertoire a singer chooses influences it, just as do the unwise choices he makes. I’ve made mistakes, too. I didn’t limit myself to the lighter operas, but, given my penchant for the dramatic, I also sang highly dramatic works, such as Macbeth, which I sang many times. I preferred to specialize in the 19th-century repertoire because I thought it most suited to my voice. I’ve always felt more at home in Rossini, Bellini and Donizetti. I experimented with many repertoires and many styles of singing and came to the conclusion that the 19th-century school was the best for me. And I continued in this repertoire. We should not force the voice. When a singer studies a work that he realizes is not suited to his particular vocal technique, he should drop it right there and go no farther. There is no point in trying to sing what you can’t sing well. Singers must be able to feel this. They have to be able to choose their repertoire wisely. Too often a young singer, eager for a career, will agree to sing anything, and after two years the voice is gone. This is what happens to young singers today. I sang for almost 40 years, don’t forget.

SZ: What were the mistakes?

LG: Mine? There were so many! [Laughs.] For example, I chose to sing a repertoire that perhaps was too strong for my voice. Naturally I had to force somewhat. With time the voice became wider and the basic color changed. Perhaps it acquired more dramatic force; before, it had been more lyric.

SZ: Did you still have a high F?

LG: [laughs] No, that disappeared after I left the conservatory. But I had a high E-flat for many years. But you have to be very careful. For example, in 1959, after singing Prokofiev’s Fiery Angel, I realized that I no longer could sing a high C. That famous pianissimo high C in Aida had become difficult for me. And so I dropped Fiery Angel from my repertoire after two performances.

SZ: Did the high C return?

LG: For a while, yes. But it slowly disappeared again. After all, I had begun to sing Macbeth, Vespri Siciliani, some verismo, Gioconda, for example. 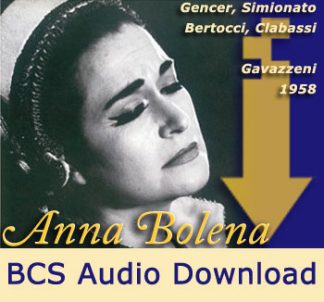