This recording has a bad reputation because Gigli, supposedly, is over the hill. I hadn’t listened to it since my teens. My first reaction on hearing it again was that to sing Radamès Gigli denies the sweetness of his voice and belts, making him sound more ordinary. Then I realized that he successfully redesigns his singing for this role: his objective is not to put forward beauty of sound but to feel the emotions in the music and words. No other recorded tenor sings the part with so much temperament or such variety of inflection. But the inflections aren’t a series of chiaroscuro effects, as in Butterfly; instead they are dictated by his viscera. His fire quickly swept me away. In the “Tomb Scene” he does do some alternation of closed, open and covered singing for interpretive effect:

He sings “degli anni tuoi nel fiore” covered and then sings “fuggir la vita!” open. He next sings “T’avea il cielo per l’amor creato” covered but sings “ed io t’uccido per averti amata. No,” open but then sings “Non morrai! troppo t’amai!” with varying degrees of open and closed tone, before ending up covered on “troppo sei bella!” To convey the heroism of many passages in the ensembles he sings with open sounds and finds a tonal squillo (ring or ping) not characteristic of him. The critics longed for the honeyed tones of his recordings from the 1920s, but the role doesn’t call for them. They failed to grasp that he had changed his singing so as to impart slancio (oomph) and to plumb emotional depths. His voice momentarily is unsteady on a couple of sustained tones. But on the whole he expresses the drama more than any other Radamès.

Okay, so his voice isn’t entirely tuned for “Celeste Aïda.” In descending passages the lower note of a half step often is flat, making the interval too wide. But from the aria on Gigli sizzles. And so, mostly, do the others.

Caniglia’s Aïda is heartfelt, and she feels the words. She supplicates beautifully, for example, in “Numi pietà” and “Ah! pietà ti prenda del mio dolor” and is far more effective than in Tosca. Admittedly, some of her intonation makes me flinch and not only when she sings high. She is at her most appealing when singing softly, inwardly, as in “O patria mia,” where you feel she is dreaming of another world. Unfortunately her soft voice and loud voice seem to come from two different throats. She tapers phrase endings and does something I don’t recall having heard from another singer in Verdi—apart from Gigli: Verdi sometimes wrote slurs over phrases that contain notes marked staccato. At first blush the two marks seem incompatible. What did he intend? Probably small diminuendos after each note marked staccato. One finds such markings on recurrences of the words “O patria mia”: “O [diminuendo] pa- [diminuendo] tria [diminuendo].” How can one execute such a direction without causing the phrase to fail to move forward? By making the diminuendo after “O” fade into silence, the diminuendo after “pa” fade less and the one after “tria” fade hardly at all. This is the way Caniglia tends to treat such phrases. Gigli does the same thing on “[Io] son di-so-no-[rato],” where the notes in question are marked marcato, with a legato mark over them, but otherwise, tends to ignore such markings, as do Stignani, Bechi and the others.

Stignani changes her sound according to context, from cuddly soprano to attack mezzo. Sometimes her tone is very brilliant. She often sings with little breath support. Her breath span also is short. Like Gigli she often gets behind the beat momentarily when she sings “r,” particularly when it follows or is preceded by another consonant. She frequently sings “u” with an umlaut, as did many then, and her pronounciation of “e” sometimes is sui generis: “Viani” instead of “Vieni,” “Anetama” instead of “Anetema” and “Ampia razza” instead of “Empia razza.” How did they let her get away with that in diction-crazed Italy? (Caniglia who, like Stignani, studied voice with Agostino Roche at the Naples conservatory, doesn’t do such things.) In the “Judgement Scene” Stignani lacks pathos and doesn’t sustain interest. Would that her emotions were as special as her voice! At the opera’s end she places farther into the mask for “pace, pace, pace!”

At his entrance and again in the duet with Aïda, Bechi gave me spinal chills through temperament, also his treatment of words. On such utterances as “Non sei mia figlia! De’ Faraoni tu sei la schiava!” he is thrilling—even if he does go sharp—and he is moving on “vinto, straziato.” Pasero’s voice has squillo, also an omni-present fast vibrato reminiscent of an earlier age. He too oozes temperament, but his pitch is a mite droopy, his tone sometimes nasal, from extreme forward placement. We think of Tajo as a buffo caricato (exaggerated comic), but here he sounds like a basso nobile, his tone more focused than later in his career.

The chorus sometimes drags behind the beat and sags in pitch. The orchestral playing is of no great sensitivity. The strings sometimes turn upward-moving notes into glissandos whereas some other orchestras articulate the passages. Serafin achieves excitement and surge partly though forward motion, partly through fast tempos. At two hours, 20 minutes, this is one of the fastest Aïdas.
—Stefan Zucker 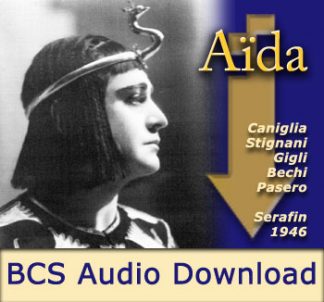