Those familiar with Opera Fanatic: Stefan and the Divas may wish to compare Olivero’s Adriana monolog here with the one she performs there.

Olivero’s most famous Adriana is from the San Carlo of Naples in 1959, when she stepped in for Tebaldi and won over the Tebaldiani to the point that they threw the carnations intended for her at Olivero. But Olivero’s performance on that occasion is blander than this one, from Holland. Here she has many more nuances musically and brings the words alive more, through inflections and intensions. And she has still more fire. –Stefan Zucker

“The opera with which Magda Olivero is most identified is Adriana Lecouvreur, Francesco Cilea’s 1902, verismo classic. Cilea himself so admired Olivero’s performance of his heroine, which she first sang in 1938, that he thanked her for her interpretation: Olivero’s approach to the end of Adriana’s entrance aria,”Io son l’umile ancella,” was sanctioned by the composer as the way it should be done. Adriana, in fact, was the role that brought the soprano back to the stage–at the request of its dying composer–in 1951, after a decade of premature retirement. But the fact that Olivero studied the role of Adriana with Cilea would count for little were it not for the fact that the soprano is, as Adriana describes herself, the humble servant of the creator’s genius. Olivero is Adriana and vice-versa.

“Having seen Olivero as Adriana in the late 1960s, this writer can attest to the glory of her singing and acting, the total identification she brought to the role and her absolute rock-solid control of her voice, including an eerie pianissimo used–but never overused–to haunting effect. When it comes to interpretation on this level, subjectivity will dictate one’s favorite–all available Olivero Adrianas are worth having. But this Adriana is arguably her most vocally secure, beautifully measured reading. The many vocal effects aimed for by Olivero, then fifty-five, are all achieved in this concert performance, without cheating the drama in any way: the Act III Phédremonologue and all of Act IV, from “Poveri fiori” on, are perfection.

“The balance of the cast lends more than adeqate support. Tenor Ferrando Ferrari’s Maurizio is a bit too lyric in weight but idiomatic and elegant in delivery. Renato Capecchi is a terrific, nuanced Michonnet, Mimi Aarden a fiery, fearless rival as the Principessa and Mario Carlin the quintessential oily Abate di Chazeuil. Fulvio Vernizzi conducts lovingly, and the Broadcast Orchestra plays superbly.

“The recorded sound rivals good commercial recordings of the era.”

I regret never seeing Magda Olivero on stage. Adriana Lecouvreur, one of her finest roles, can be heard from various venues. That from Amsterdam in 1965 with Ferrando Ferrari as Maurizio appears in good sound on Opera Fanatic. Listen to Olivero’s artistry. She has the mastery of the role, producing abundant vocal dynamics, from a delicate fil di voce to prima donna passion: everything in accordance with Adriana’s feelings and interactions. The almost forgotten Ferrari also introduces a range of shadings and contrasts. He is a lirico spinto tenor who is willing to sing quietly yet possesses a ringing top. Renato Capecchi pleases with one of the most restrained openings to Michonnet’s Act I monologue, and one feels it is just right. As the Princess, Mimi Aarden links her upper and lower tones awkwardly once or twice but suggests the woman’s envy. Does a better recording of Cilea’s opera exist than this one under Fulvio Vernizzi?

The hype is correct. This really is Olivero’s best Adriana. She is astounding. In comparing it to the 1959 recording with Corelli, I would say that she sounds even younger six years later in this performance. The rest of the cast is every bit as wonderful as advertised, without being as glamorous as the 1959. Superb sound. A must-have.–Howard M. Bushnell (author of a biography of Malibran)

I’ll always be thankful to Stefan Zucker for the film “Opera Fanatic,” the documentary that shows him criss-crossing Italy to interview the renowned divas (minus Tebaldi and Callas) who made up Italian opera’s last golden age. Among other things, that film convinced me about the opera Adriana Lecouvreur, a piece very different from the others produced in the verismo period. Olivero is perhaps the soprano most closely identified with Adriana, and her famous Naples recording is has tended to be the choice of cognoscenti. But this recording from the Netherlands, published by Stefan Zucker’s own Opera Fanatic label, is a thoroughly compelling experience. Also starring Olivero, it grabs your attention at the first bar and doesn’t let it go. I haven’t listened lately to the Naples performance, but I’ll take Zucker’s word that this one beats it for intensity. It surely does so for sonic beauty. The orchestra under Vernizzi does not put a foot wrong. I was especially taken by Mimi Aarden, a pure contralto, who beats both Simionato and Barbieri in the role of the Princess. That’s quite an accomplishment. Levine’s recording with Scotto and Domingo is the usual preference for a studio recording, and I haven’t listened to that in a while either, but I have to believe that this one is better. It’s obviously live — an audience is there to applaud at the end of each act — but seems to be a radio rather than a theater performance. At any rate, it combines the virtues of studio sound and a live occasion. The price of the set is more than reasonable, and the musical experience is pure gold.–Dabí Sánchez

Read An Interview with Magda Olivero 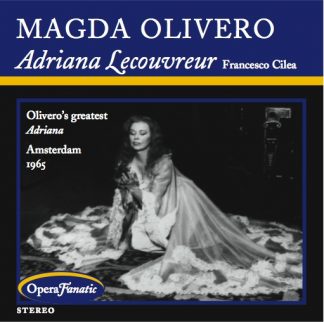